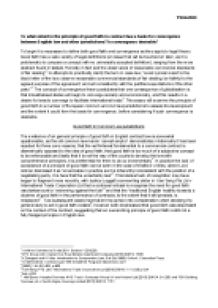 To what extent is the principle of good faith in contract law a basis for convergence between English law and other jurisdictions?

Transfer-Encoding: chunked ﻿Y3844500 To what extent is the principle of good faith in contract law a basis for convergence between English law and other jurisdictions? Is convergence desirable? To begin it is necessary to define both good faith and convergence as they apply to legal theory. Good faith has a wide variety of legal definitions (an issue that will be touched on later, as it is problematic to compare a concept with no universally accepted definition), ranging from the more abstract found in statute,?honesty in fact and the observance of reasonable commercial standards of fair dealing?[1] to attempts to practically clarify the term in case law, ?avoid cynical resort to the black letter of the law; observe reasonable commercial standards of fair dealing; be faithful to the agreed purpose of the agreement; and act consistently with the justified expectations of the other party?[2]. The concept of convergence theory postulates that one consequence of globalisation is that industrialised states will begin to converge socially and economically, and this results in a desire for laws to converge to facilitate international trade[3]. This essay will examine the principle of good faith in a number of European common and civil law jurisdictions to assess its development and the extent it could form the basis for convergence, before considering if such convergence is desirable. Good faith in Common Law jurisdictions The existence of an general principle of good faith in English contract law is somewhat questionable, as the old common law maxim ?caveat emptor? demonstrates. ...read more.

others by imposing a duty of care[19] or to decree the performance of a contractual duty if the remedy of damages if not sufficient[20]. Developments such as refusing to enforce penalty clauses agreed by both parties to a contract are also notable. This general lack of enforceability can be traced back to 1720[21] and was recently reaffirmed by the Supreme Court in the joint cases of Cavendish Square Holding BV v Talal El Makdessi and Parking Eye Limited v Beavis (2015), where Lord Neuberger commented that there was an ?imbalance in the parties rights. But it did not arise contrary to the requirement of good faith?[22] and went on to conclude such clauses could only be enforced if they were not, ?out of all proportion to any legitimate interest of the innocent party in the enforcement of the primary obligation? [23]. The idea that a penalty could only be enforceable if it was a term a reasonable person would have agreed to is interesting, as the definition of such; ?a hypothetical person in society who exercises average care, skill, and judgment in conduct?[24] doesn't appear to be too different from the ideal of operating in good faith. It is a possibility that linguistic differences may hide parallels, and that English contract law has been buffered by a form of good faith all along, albeit a discretional one contained in fragmented bodies of law. Is convergence desirable? ...read more.