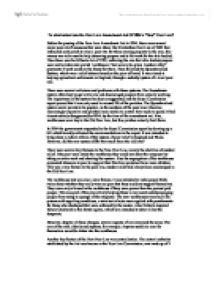 To what extent was the Poor Law Ammendment Act of 1834 a 'New' Poor Law?

To what extent was the Poor Law Amendment Act Of 1834 a “New” Poor Law?

Before the passing of the Poor Law Amendment Act in 1834, there were several major poor relief measures that were taken: the Elizabethan Poor Law of 1601 that instructed each parish to raise a poor rate for those owning property in the area, this money was to be used to help deserving paupers and to fin work for the able-bodied. Then there was the Gilberts Act of 1782, enforcing the rule that able-bodied paupers were not be taken into parish ‘workhouses’ but were to be given ‘outdoor relief’ payments if work could not be found for them. Then followed the Speenhamland System, which was a relief scheme based on the price of bread. It was aimed at helping agricultural settlements in England, through a subsidy system of a local poor rate.

There were several criticisms and problems with these systems. The Roundsman system often kept wage levels low and discouraged paupers from actually working. The importance of the system has been exaggerated, and the Royal Commission report proved that it was only used in around 5% of the parishes. The Speenhamland system never proved to be popular, as the numbers of the poor rose it became increasingly expensive and parishes were unable to control how much to spend. It had almost entirely disappeared by 1834, by the time of the amendment act. Also, workhouses were key to the Old Poor Law, but few parishes actually built them.

In 1834 the government responded to the Royal Commission report by drawing up a bill which broadly reflected the recommendations in the report. It was intended to bring about a radical reform of the system of poor relief in England and Wales. However, did the new system differ that much from the old laws?

There were several key features to the New Poor Law, mainly the abolition of outdoor relief. I the poor were inside the workhouse they could not cheat the ratepayer by taking on extra work and cheating the system. Also the segregation of the workhouse prevented labourers to poor to support their families would not have more children. This was a new feature to the poor law; outdoor relief had always been encouraged in the Old Poor Law.

The workhouse test was also a new feature; it was intended to make people think twice about whether they really were so poor that they could not support themselves. They were only allowed in the workhouse if they were poorer than the poorest paid pauper. This was part of the plan of only helping those in real need and discouraging people from trying to sponge of the ratepayer. The new workhouses were built like prisons with appalling conditions, a strict set of rules were applied with punishments for those who disobeyed that were enforced by the master. John Nicholls inspired Edwin Chadwick in this harsh regime, which was intended to deter all but the desperate.

However, despite all these changes, several aspects of law remained the same. The care of the sick, elderly and orphans, for example. Anyone unable to care for themselves would be taken into the workhouse.

Another key feature of the New Poor Law was centralisation. The central authority established by the Act was known as the Poor Law Commission, was made up of 3 commissions, based in London, given wide-ranging powers to issue rules and regulations for the management of the Poor Law. Assistant Commissioners worked under the guidance of the Poor Law Commissioners to supervise the implementation of the Act in localities. Edwin Chadwick was central to the new law and was secretary of the commission. This was another of the new method of managing poor law techniques.

Poor Law Guardians were then to be locally elected; they replaced the unelected ‘Overseers of the Poor’ whose work had been heavily criticised (like many aspects of the Old Poor Law) in the Poor Law Commission. Ratepayers were entitled to vote for Guardians on the board; the more property they had, the larger the number of votes they could use. However, characteristics of the Old Poor Law remained the same; such as, the Local Magistrates remaining on the Board of Guardians.

The parishes that were created in the Old Poor Law were then grouped together in Poor Law Unions to produce sufficiently large units to provide appropriate services and to build new workhouses if required. Each parish in a Union elected its own representatives separately, and each parish bore its own share of the cost (however this changed again in 1865).

To conclude, as have been demonstrated above there were several changes that took place through the New Poor Law, however, several aspects remained the same. In my opinion the changes that were made were individual enough for the law to be classed as ‘new.’ It took onboard improvements, changes and similarities in order to be implemented effectively.