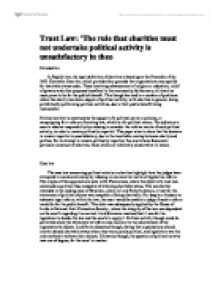 Trust Law: 'The rule that charities must not undertake political activity is unsatisfactory in theo

Trust Law: 'The rule that charities must not undertake political activity is unsatisfactory in theo Introduction In English law, the legal definition of charities is based upon the Preamble of the 1601 Charitable Uses Act, which provides four grounds that organisations may qualify for charitable status under. These involving advancement of religion or education, relief of poverty and other purposes beneficial to the community, furthermore, all charities must prove to be for the public's benefit. This though has lead to a number of problems where the charity involves a degree of political activity, with charities in general, being prohibited by performing political activities, due to their public benefit being incalculable. Political activity is construed as the support of a political party or policies, or campaigning for a reform of existing law, which is of a political nature. The judiciary is seen to absolve responsibility by refusing to consider the relative merits of such political activity, in order to remain politically impartial. This paper aims to show that the decision to remain impartial is unsatisfactory, due to the inevitable overlap between charity and politics. For in attempt to remain politically impartial, the courts have favoured a particular construct of charities, those which are inherently conservative in nature. Case law The case law concerning political activity in charities highlight how the judges have attempted to avoid controversy by refusing to examine the merits of legislative reform. ...read more.

unsatisfactory, where the role of many charities is to fill the gaps left by the government in their provision of services and benefits. The attainment of government support thus is often fundamental to the objects of the charity, as this will result in increased awareness and funding. Therefore political activity in this sense will be of great value to the charity, than the actual performing of charitable acts. The conservative approach of the courts may also be explained by fear of abuse if political activity was allowed. Where political organisations would take advantage of charitable status and the subsequent privileges to further their political goals. However, the stimulation of greater political debate is for the public benefit where the democratic process is aided by greater public awareness of fundamental issues regarding governmental policy. In the USA, the overlap between charity and politics is acknowledged to a greater degree, resulting in the law being based on a more logical theory, fairness to the taxpayers. Where unfair burdens upon taxpayers to subsidise non-charitable activities has been significant in the limitation of political activity of charity, impartiality of the courts being irrelevant to the considerations. Although,a test of substantiality is also employed by the courts, there is a more liberal approach to towards the interpretation of charity and political activity. Therefore the theory behind the need for political impartiality is flawed, with the judiciary being inherently bias. ...read more.

The courts moreover, have favoured an image of charity that is inherently conservative, consequently charities have had to adhere to such a construct to avoid loss of status. This highlights the impossibility of judicial impartiality, for even if decisions on public benefit may not be made concerning political activity, this fails to explain the regulating of how the ancillary political activities may be carried out. For by prohibiting the use of campaigning and lobbying, the courts along with the Charity Commissioners, are promoting their own construct of charities. Although the courts have acknowledged that the assessing of public benefit was a question of degree, thus the court has flexibility in its decision making. However, in applying an 'hard and fast rule', the courts have overlooked the need for flexibility, in attempt to impose certainty and neutrality. Neutrality though has not been achieved and whilst with guidelines from the Charity Commissioners, there is now greater certainty over the degree of political certainty this has been at the expense of valuable charitable work. Where charities have been unable to carry out certain forms of campaigning which would increase their profile and subsequently funds, thus benefit the public. Significantly, in light of the Charity Commissioners recent guidelines and Guild, where a more liberal approach was taken towards the definition of charity, this may indicate a general shift in judicial attitude. Thus it is possible that greater political activity will be permitted in accordance with the inevitable overlap between the two, resulting in a more satisfactory approach. ...read more.