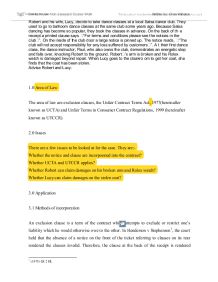 Robert and his wife, Lucy, decide to take dance classes at a local Salsa dance club. They used to go to ballroom dance classes at the same club some years ago. Because Salsa dancing has become so popular, they book the classes in advance. On the back of the receipt a printed clause says ?"For terms and conditions please see the notices in the club?". On the inside of the club door a large notice is pinned up. The notice reads, ?"The club will not accept responsibility for any loss suffered by customers?". At their first dance class, the dance instructor, Paul, who also owns the club, demonstrates an energetic step and falls over, knocking Robert to the ground. Robert?'s arm is broken and his Rolex watch is damaged beyond repair. When Lucy goes to the cloakroom to get her coat, she finds that the coat has been stolen. Advise Robert and Lucy. 1.0 Area of Law The area of law are exclusion clauses, the Unfair Contract Terms Act, 1977(hereinafter known as UCTA) and Unfair Terms in Consumer Contract Regulations, 1999 (hereinafter known as UTCCR). 2.0 Issues There are a few issues to be looked at for the case. They are:- Whether the notice and clause are incorporated into the contract? ...read more.

Therefore, the notice would not cover liability as a result of negligence. 3.3 UCTA The next issue is to consider the enforceability of UCTA. Section 2(1) of UCTA restricts the ability to exclude business liability for negligence in relation to personal injuries although it is indisputable that Paul's negligence in falling over broke Robert's arm. Therefore, Paul cannot rely on any clauses and that Robert can sue for damages. Section 2(2) further provides that in the case of 'other loss or damage', a person cannot exclude or restrict his liability for negligence except insofar as the term or notice satisfies the test of reasonableness. In determining reasonableness, the guidelines are given in the 2nd Schedule of the UCTA. Firstly, it is relevant to consider the strength of the bargaining positions of the parties. Secondly, it is relevant whether Robert and Lucy had an opportunity of entering into a similar contract with other providers of Salsa dancing without having to accept a similar term. Due to the popularity of the Salsa class, it is arguable that Robert and Lucy has less bargaining powers as they have to book the class in advance and there was no other classes of a cheaper or more expensive price. ...read more.

Applying all the four elements into the case, it is thereby likely that the clause and notice is contrary to UTCCR and therefore not binding on Robert or Lucy. 4.0 Conclusion In conclusion, Robert and Lucy have a high chance to claim damages as it is likely that the clause and notice are invalidated due to the method of incorporation and rules of construction. Paul strongest ground for defense in the case is that the clause and notice have been reasonably contemplated due to past dealings. However this argument would not stand as there were inconsistencies on the form and substance of the dealings. Notwithstanding the above, UCTA applies on bodily injuries and therefore Robert can definitely claim damages on the broken arm. Moreover, negligence is not included in the notice so it is likely that Robert could claim damages on the watch. It is likely that the loss of Lucy's coat is not covered under UCTA but the effect of UCTTR will render Paul liable for the damages. 1 (1875) LR 2 HL 2 [1956] 1 WLR 461 3 [1964] 1 WLR 125 4 [1949] 1 KB 532 5 [1953] 1 WLR 1285 6 [1972] 2 QB 71 7 [1996] CLC 265 8 [2002] 1 AC 481 9 ibid. Lord Bingham para 17 Contract Law: Non assessed Course Work Written by: Chan Winston Contract Law: Non assessed Course Work Written by: Chan Winston ...read more.

Overall, a clearly written and largely accurate essay on exclusion terms. The author could do more to find specific cases that reflect the facts of the problem though, and the interrelationship between UCTA and UTCRR in the conclusion is not as clear as it could be. 4 stars.