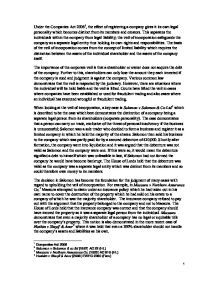 Veil of Incorporation. Under the Companies Act 2006[1], the effect of registering a company gives it its own legal personality which becomes distinct from its members and creators.

Under the Companies Act 20061, the effect of registering a company gives it its own legal personality which becomes distinct from its members and creators. This separates the individuals within the company from legal liability; the veil of incorporation safeguards the company as a separate legal entity thus holding its own rights and responsibilities. The basis of the veil of incorporation comes from the concept of limited liability which requires the distinction between the assets of the individual shareholder and the assets of the company itself. The importance of the corporate veil is that a shareholder or owner does not acquire the debt of the company. Further to this, shareholders can only lose the amount they each invested if the company is sued and judgment is against the company. Various common law demonstrates that the veil is respected by the judiciary. However, there are situations where the individual will be held liable and the veil is lifted. Courts have lifted the veil in cases where companies have been established or used for fraudulent trading and also cases where an individual has executed wrongful or fraudulent trading. When looking at the veil of incorporation, a key case is Salomon v Salomon & Co Ltd2 which is described to be the case which best demonstrates the distinction of a company being a separate legal person from its shareholders (corporate personality). ...read more.

Improper motive and fraud are demonstrated in the case of Wallersteiner v Moir13 where the appellant controlled a number of companies. Mr Wallersteiner was moving money between the companies aware of what he was intending to achieve. There was documentary evidence of this act which was unlawful. Mr Wallersteiner attempted to hide behind the veil of incorporation however, Lord Denning provided that the court 'pull aside' 14 the veil as the appellant should be held liable for his dishonest actions. Further, s.21415 is another key section of the statute which is considered an exception to the Salomon principle. Section 214 is relevant where a director of the company who, at an time earlier to the commencement of the winding up had knowledge, or could have insight that the company was heading toward liquidation, but continued to trade. If this takes place, the court may instruct that person(s) to make a contribution to the assets of the company as the court seeks appropriate. This is reaffirmed in the case of Winkworth v Edward Baron Development Co Ltd16 where Lord Templeman provided that when a company is insolvent or at threat of insolvency, a duty exists by the director to the company's creditors and the company to ensure that the property of the company is not 'dissipated or exploited for the benefit of the directors to the prejudice of the creditors.'17 Continuing to trade with the knowledge of insolvency exposes creditors to a risk of loss and would lead to ...read more.

In addition to case law, statutes such as the Company Directors Disqualification Act27 can also be noted in protection of the veil. Under the Company Directors Disqualification Act, if a director is disqualified and acts as director through the period of their disqualification they will be held liable for their actions, rather than the company. Liability can pass to the individual person rather than the company if certain rules are not followed, for example if a public company does not have a s117 certificate from Companies House, a director may become liable for any debts suffered. However, when looking at the veil of incorporation it seems that the courts look to motive as in Salomon. If there is improper motive such as fraud or wrongful trading the court will look to ignoring the veil. The veil of incorporation both protects the company and the individual however, there are always risks as a person may use it as a shield to safeguard themselves when they should be held liable for their actions. It is a question of opinion whether the statutory provisions and common law have put an end to the potential abuse of the corporate veil in order to avoid the courts being given discretionary powers. We can see that the veil is respected by the courts through cases such as Salomon, Macaura and Lee, nonetheless where the courts are given reason to believe the veil of incorporation is being abused, they will not hesitate to lift the veil between the company and its members. ...read more.