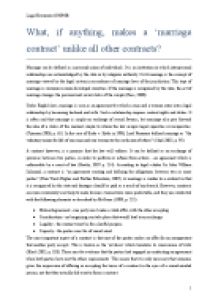 What, if anything, makes a marriage contract unlike all other contracts?

﻿Legal Economics05/09/08 What, if anything, makes a ?marriage contract? unlike all other contracts? ________________ Marriage can be defined as a personal union of individuals. It is an institution in which interpersonal relationships are acknowledged by the state or by religious authority. Civil marriage is the concept of marriage viewed by the legal system in accordance of marriage laws of the jurisdiction. This type of marriage is common in more developed countries. If the marriage is recognised by the state, the act of marriage changes the personal and social status of the couple (Rees, 2008). Under English law, marriage is seen as an agreement by which a man and a woman enter into a legal relationship by becoming husband and wife. Such a relationship imposes mutual rights and duties. It is often said that marriage is simply an exchange of sexual favours, but marriage also puts forward the idea of a status of the married couple to whom the law assigns legal capacities or incapacities. (Fineman 2006, p. 61). In the case of Hyde v. Hyde in 1996, Lord Penzance defined marriage as ?the voluntary union for life of one man and one woman to the exclusion of others? (Shah 2005, p. ...read more.

For example if the civil element of the religious ceremony is absent, the marriage will not be recognised by the government meaning that although the couple will be married, any break-up will not warrant damages to be paid to either party. Despite a marriage ceremony being carried out by a religious or civil official, most religious customs uphold the idea of the marriage itself being the act of two individuals, either as a form of contract or as an exchange of vows, with the guests acting as witnesses (Marriage in England and Wales, 2008). Although the idea of a marriage is a religious one, marriages have often been regarded as a financial transaction (Witte 1997, p. 2). This was common particularly during the 19th and early part of the 20th century. Wealthier families often only permitted their children to marry into other wealthy families. This was usually to keep the money within the family and to stop any ?gold diggers? from having access to the money. It also allowed closer business connections between the two families. However, marriage in those days was thought of as being for life, and divorce did not occur very often at all. ...read more.

However, should a marriage break-up because the husband committed adultery, the wife may expect to receive restitution interest so her life will be restored to the way it was before the marriage. Secondly, she might also expect to receive reliance interest, in that she will be compensated for the actions of the husband. Finally she might also expect to receive expectation interest because she thought the marriage would last until death. That is, reliance and restitution damages would put the wife in the same position she was before the marriage, and expectation damages would leave her in the same position as if the marriage had lasted until death. All three types of damages are often claimed when children are involved. Referring to the previous example, the wife would need to be compensated to the position she was in before she got married, but she has children so would need to be compensated as if the marriage had lasted so she can still raise the children the same way they would have otherwise been. This suggests that marriages are treated as a contract should there be a breach. When a marriage contract begins, there are no set terms, only applied terms. Therefore it is implied that both parties will remain faithful even though this is not specifically stated. ...read more.