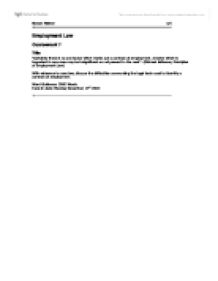 With reference to case law, discuss the difficulties surrounding the legal tests used to identify a contract of employment.

Employment Law Coursework 1 Title "Certainly there is no one factor which marks out a contract of employment. A factor which is important in one case may be insignificant or not present in the next". (Michael Jefferson, Principles of Employment Law) With reference to case law, discuss the difficulties surrounding the legal tests used to identify a contract of employment. Word Guidance: 2000 Words Hand in date: Monday November 17th 2003 Most people, I think, could answer the question "Are you an employee?". Some people may answer yes, while others, those being self-employed, will reply in the negative. However, as simple the question appears, in law a positive result gives significant rights and obligations. It is imperative therefore that an employee be distinguished from a independent contractor. It is said that an employee works under a contract of service, whereas an independent contractor works under a contract for services. In my opinion, that distinction does nothing to help distinguish, indeed it perhaps confuses, the situation. There are a multitude of rights that flow from being an employee which are not available to independent contractors. These include written particulars of employment; unfair dismissal, redundancy, equal pay, statutory sick pay and maternity rights; health and safety provisions; rights to statutory and contractual notice periods; social security payments; amongst many others. ...read more.

The fact that the drivers could delegate their duties was crucial as this is not something seen in employment contracts. The test has now been accepted by the courts. The first limb of the test can be seen from Lord Thankerton's adapted control test in Short v J & W Henderson7. Adrian Williams argues that the inclusion of "or other renumerartion" can be criticised in that it doesn't distinguish between the regular salaries paid to employees and the lump generally paid to independent contractors. The second test is merely a restatement of the control test. In Market Investigations v Minister of Social Security8, Cooke J observed that "control will no doubt always have to be considered, although it can no longer be regarded as the sole decisive factor". In that case, Cooke J considered the third limb of the test. The question to be determined by the court was whether a person was in business on his own account. That case concerned an interviewer who carried out market research part time. She could do the work at whatever time she wished, provided that it was done within the given time. It was held that she was an employee. ...read more.

Likewise, in Motorola v Davidson20, the employer had a sufficient degree of day to day control, which made the worker an employee. All the relevant factors need to be considered, and as long as the employment tribunal takes these into account, their decision will be a question of fact and their finding can not be challenged unless they came to the conclusion which could not be reasonably obtained by any other tribunal. The only thing that is certain is that if there is control, no delegation and a mutuality of obligation the court should find a contract of employment. Going back the original question, it is clear that the tests created by the Courts were inadequate in a modern society. The courts now tend to look at a multitude of factors in deciding employee status. The most important factor, it seems, will be mutuality of obligations. Adrian Williams concludes his article by suggesting that statutory intervention is necessary. I agree that because of the importance and number of rights an 'employee' will receive, it is paramount that the courts can determine worker status accurately. I find it difficult to see though how a statutory test would advance the position we are in now, the position of painting a picture of all factors and balancing them out. ...read more.