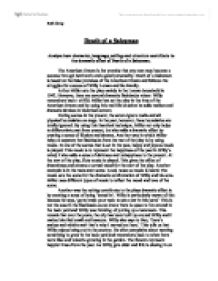 Analyse how character, language, setting and structure contribute to the dramatic effect of Death of a Salesman.

Death of a Salesman Analyse how character, language, setting and structure contribute to the dramatic effect of Death of a Salesman. The American Dream is the promise that any man may become a success through hard work and a good personality. Death of a Salesman is based on the false promises of the American Dream and follows the struggles for success of Willy Loman and his Family. Arthur Miller sets the play mainly in the Loman household in 1942. However, there are several dramatic flashbacks where Willy remembers back t o1928. Miller has set the play in the time of the American Dream and by using this real life situation he adds realism and dramatic devices in historical context. During scenes in the present, the actors ignore walls and all physical boundaries on stage. In the past, however, these boundaries are totally ignored. By using this theatrical technique, Miller not only helps to differentiate past from present, but also adds a dramatic effect by creating a sense of illusion and dreams. Another way in which Miller helps to separate the flashbacks from the rest of the play is by using music. In one of the scenes that is set in the past, happy and joyous music is played. This music is to represent the happiness of the past in Willy's mind; it also adds a sense of darkness and unhappiness to the present. At the start of the play, flute music is played. ...read more.

This contrast of the two acts creates the drama of the play. Arthur Miller uses American dialect and colloquial language throughout the play to add to the realism. He uses realistic terms and structures the dialogue so the audience feel they can relate to the story and believe that what is happening is real. Miller creates the characters to be ordinary Americans which makes them seem more realistic, therefore adding drama. Willy Loman is the protagonist in the play. He is a sixty year old salesman in the lowest of positions, who believes in the false promises of the American dream. He lives in a world of fantasies and illusions and is unable to distinguish reality from his dreams. He cannot face the truth about himself of his sons. He lies that he is well liked by his company and makes up that he gets paid a lot more than he really does. His whole life is a lie. Willy has an unstable relationship with both his sons, Happy and Biff. Willy knows inside that he is a failure and so puts all his hopes into his sons, especially Biff. Biff is the more attractive of the two boys and was an excellent athlete at school. Willy told him that 'personality always wins the day' and makes him believe he can get by on his good looks and the 'smile on his face.' As a result of this he "flunks" math and cannot get into university. ...read more.

Willy is constantly complaining that the refrigerator, the car and the house are all breaking down, much like himself. Willy has a strong desire to own something for himself before it is broken. He says, 'For once in my life I would like to own something outright before it is broken.' This is echoed on the day of his funeral when Linda says, 'I made the last payment on the house today. Today, dear. And there'll be nobody home.' This brings out the dramatic irony that Willy has spent all his life paying off the mortgage and when he finally does, he is not there to enjoy it. Just like Willy's refrigerator, Willy is used up and broken. After working for the Wagner Company for thirty-four years, they have squeezed all they could out of him, then fired and discarded him. The Requiem reflects on the rest of the play and the themes are tied together. We see that Happy is going to turn out like his father. When Biff gives him a hopeless glance we know that he is also aware of this. We also find that Linda may have been taken in by Willy's illusions when she asks, 'Where are all the people he knew?' But really Willy's only friend was Charley, however Linda doesn't seem to realise this. The real tragedy is that Willy killed himself because he believed, 'a man is worth more dead than alive.' He wanted the life insurance money to go to his sons to set up a business. The irony is that the insurance would not cover suicide. Willy's life and death was all a failed attempt for success. Ruth Greig ...read more.