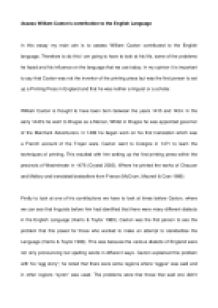 ﻿Assess William Caxton?s contribution to the English Language In this essay my main aim is to assess William Caxton contributed to the English language, Therefore to do this I am going to have to look at his life, some of the problems he faced and his influence on the language that we use today. In my opinion it is important to say that Caxton was not the inventor of the printing press but was the first person to set up a Printing Press in England and that he was neither a linguist or a scholar. William Caxton is thought to have been born between the years 1415 and 1424. In the early 1440?s he went to Bruges as a Mercer, Whilst in Bruges he was appointed governor of the Merchant Adventurers. In 1469 he began work on his first translation which was a French account of the Trojan wars. Caxton went to Cologne in 1471 to learn the techniques of printing, This resulted with him setting up the first printing press within the precincts of Westminster in 1476 (Crystal 2003). Where he printed the works of Chaucer and Mallory and translated bestsellers from France (McCrum, Macneil & Cran 1986) Firstly to look at one of his contributions we have to look at times before Caxton, where we can see that linguists before him had identified that there were many different dialects in the English Language (Harris & Taylor 1989). ...read more.

Therefore this marked the first time that the English language was not competing with French (Harris & Taylor 1989). When Caxton chose to print in English, for the first time English could be transformed into a language of learning (Mcintyre 2009) as it meant that the works of Greek and Roman scholars could be translated into ?local languages? (Graddol, Leith, Swainn, Rhys & Gillen 2007). When he translated some of the classics, he bought in vocabulary that is still used in present day English for example from Jason (1477) we get abandon and from Eneydos (1490) we get abolish and absorb (Hogg & Denison 2006). Printing also meant that literature was made more accessible for everyone. However this meant Caxton was left with the problem of how to spell the language he had chosen (Harris & Taylor 1989), this was because before Caxton there were no dictionaries or grammars of the English language and no universally, agreed and assigned alphabet (Harris & Taylor 1989). Words had been spelt in a way that reflected pronunciation (Mcintyre 2009), as mentioned previously this meant that different regions had different spellings because of the conflicting dialectal variation, but ?printing is a communications technology that requires uniformity.? (Harris & Taylor p.91 1989) Therefore he needed standardisation to make sure that the printing press would be a success. ...read more.

This is not justified since when Caxton chose to standardise the dialect of London and the East Midlands. It would appear that this would have been an obvious choice; on first appearances it would appear that he had set himself a challenge; however before Caxton, the Chancery standard had already been established. The Chancery Standard was a first attempt at making this dialect a standard. It had come into use during the reign of King Henry V when his government needed a language that was clear and unambiguous that they could use to record official documents (Crystal 2003). To conclude, in my opinion I think it is unfair to say that Caxton can be credited with contributing a lot to the english language as he did also cause some problems along the way. However, I think it is very important that Caxton realised how important it was that we as a country were all using the same words and spellings as it was essential for all the regions to move forward together. Instead of all the different regions moving forward at different paces in order to reach the same eventual goal. I think that although Caxton can not be credited with the invention of the printing press, by bringing it to England he helped us advance as ?printing was the technological foundation of the European Renaissance?. (Harris & Taylor p.91 1989) From this quote we can see that it not only helped our societies but others in the rest of Europe. ...read more.