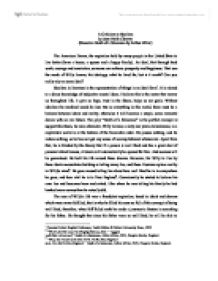 (Based on Death of a Salesman by Arthur Miller) The American Dream, the aspiration held by many people in the United State to live better (have a house

A Criticism to Idealism by Juan Pablo C�ceres (Based on Death of a Salesman by Arthur Miller) The American Dream, the aspiration held by many people in the United State to live better (have a house, a spouse and a happy family). An ideal, that through hard work, courage and conviction, someone can achieve prosperity and happiness. That was the credo of Willy Loman, his ideology, what he lived for, but is it worth? Can you really rely on some ideal? Idealism in literature is the representation of things in an ideal form1. It is related to a direct knowledge of subjective mental ideas. I believe this is the motor that moves us throughout life, it give us hope, trust in the future, helps us set goals. Without idealism the mankind would be lost. ...read more.

Occasionally he started to believe his own lies and becomes keen and exited. Like when he was telling his family he had banked more money than he actually did. The core of Willy's life was a fraudulent aspiration, based in ideals and dreams which were never fulfilled, that is why he filled his sons so full of this concept of being well-liked, therefore, when Biff failed math he made a journey to Boston in searching for his father. He thought that since his father were so well-liked, he will be able to convince the math teacher to change the grade, and that was the mentality they have throughout life. It was during this time that Biff encountered his father in the hotel room with another woman. This was the main reason why Willy's strong desire to be well-liked drove Willy to have an affair in Boston. ...read more.

He tried to bring up his children in that same world but he could not keep up the false front, and Biff would not live that way after the incident in Boston. In conclusion, the fact that Willy never accomplishes his dream drove him mad, making him develop some sort of psychotic behaviour. He was living in the past, maybe because he was trying to escape the fact that he was a fail in the present, and during the past at least he had his dreams and his faith in future. 1 Concise Oxford English Dictionary, Tenth Edition (c) Oxford University Press, 1999 2 "That's just the way I'm bringing them up, Ben - rugged, well liked, all-around" Death of a Salesman, Arthur Miller, 1961, Penguin Books, England. 3 "They don't need me in New York. I'm the New England man. I'm vital in New England." Death of a Salesman, Arthur Miller, 1961, Penguin Books, England. ?? ?? ?? ?? ...read more.