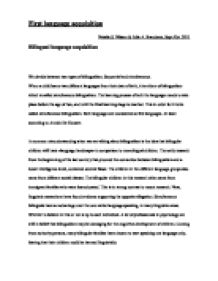 First language acquisition Natalie S. Nilssen & Julie A. Brandsnes, Sept./Oct. 2011 Bilingual language acquisition We devide between two types of bilingualism. Sequential and simultaneous. When a child learns two different languages from their date of birth, it is a form of bilingualism which is called simultaneous bilingualism. The learning prosess of both the languages needs to take place before the age of two, and until the final learning stage is reached. This in order for it to be called simultaneous bilingualism. Both languages are considered as first languages. At least according to Annick De Houwer. A common misunderstanding when we are talking about bilingualism is the idea that bilingular children will have "language handicaps" in comparison to monolingual children. The early research from the beginnning of the last century that prooved the connection between bilingualism and a lower intelligence level, contained several flaws. The children in the different language groups also came from different social classes. ...read more.

Some of the childres speak Spanish at home, while English is used everywhere else. In the kindergarden, at school, in stores and supermarkets. One of many questions that comes up when we talk about bilingual language acquisition is whether or not the language development is the same for monolingual children and bilingual children. There are two completely different kinds of for example vocabularies and syntactical systems that needs to be learned, in comparison to learning only Norwegian. If we compare the Spanish, the Norwegian and the English phrase: "I do not like mondays" we easily see that the sentence structures are completely different from one another. * No me gustan los lunes. (Don't I like the mondays) * Jeg liker ikke mandager. (I like don't mondays) * I do not like mondays. It seems likely that learning the differences in two languages is quite challenging, when these kinds of differences can be very confusing. The study of bilingualism has been going on in almost 100 years now, with the first official study in 1913. ...read more.

These cases could lead to the risk of failure or delay academicly speaking. Bilingular children could also have problems identifying with the languages, and be socio-cultural misfits. Despite this, the benefits of having two native languages are so many, better ability to learn new words easily for instance. They advantage from this in the job market, being able to speak two languages is extremely beneficial for the career opportuneties. The cultural benefits from originating from two countries are irreplaceable. Bilinguals can enjoy litterature, music and folk stories from different cultures. Think about the amount of books they have available. They have advantages in thinking, because they have more words for everything. This helps develop creativity and flexibility in their thinking. It also enhances the mental development. In fact, bilinguals have better scores at IQ tests than monolinguals. The advantages are so many. Sources: http://www.psych.mcgill.ca/perpg/fac/genesee/HDBK%20BFLA%20FINAL.pdf, sept. 2005. http://www.healthofchildren.com/B/Bilingualism-Bilingual-Education.html http://en.wikipedia.org/wiki/Simultaneous_bilingualism http://journals.cambridge.org/action/displayAbstract?fromPage=online&aid=78769 http://www.readingrockets.org/article/12916/ http://brain.oxfordjournals.org/content/121/10/1841.abstract http://news.bbc.co.uk/2/hi/uk_news/scotland/edinburgh_and_east/6382285.stm http://www.naldic.org.uk/ITTSEAL2/teaching/SLA.cfm Genesee, F., & Nicoladis, E. (2006). Bilingual acquisition. In E. Hoff & M. Shatz (eds.), Handbook of Language Development, Oxford, Eng.: Blackwell. De Houwer, Annick.The Handbook of Child Language ...read more.