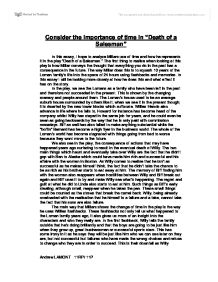 Consider the importance of time in &quot;Death of a Salesman&quot;

Consider the importance of time in "Death of a Salesman" In this essay, I hope to analyse Millars use of time and how he represents it in the play "Death of a Salesman." The first thing to realise when looking at this play is how Millar conveys the thought that everything you do in the past has a consequence in the future. The way Millar does this is to squash 10 years of the Loman family's life into the space of 24 hours using flashbacks and memories. In this essay I will be looking more closely at how he does this and what effect it has on the story. In the play, we see the Lomans as a family who have been left in the past and therefore not succeeded in the present. This is shown by the changing scenery and people around them. The Loman's house used to be an average suburb house surrounded by others like it, when we see it in the present though; it is dwarfed by the new tower blocks which suffocate. ...read more.

The main way that Millars shows the change of time in the play is the way he uses Willies flashbacks. These flashbacks not only tell us what happened to the Loman family years ago, it also gives us more of an insight into the characters and who they really are. In the first flashback, Willy tells the family outside that he's doing brilliantly and that the boys are going to be just like him when they grow up, great businessmen or successful sports stars. This has some irony in it as he says they will be just like him who we can see later on they are, but not successful but failures who have made the wrong choices and refuse to change who they are in order to succeed. This is their downfall as Willy refuses to give up the belief that if you are "well liked," you will succeed. Biff tries but can't let go of the fact that he doesn't like business and want to be in the country. The thing that makes him want to stay is the thought of his family even though there is so much argument when the family is together. ...read more.

The rest of the time switches are relatively simple compared to that one. They clearly show the change in time which makes it easier to watch. Looking closely at the flashbacks, we can see how they are carefully juxtaposed to the situation in real time. The woman's laughter at the beginnings is placed next to Willy's conversation with Linda to accent the difference of the two. The scene where Willy relives the time when Biff discovers his affaire is placed next to the restaurant scene where Biff argues with Willy. This gives the audience an insight as to why Biff acts the way he does towards Willy. Overall, in this play, I think that Millar although mainly trying to make the point that the American dream doesn't work, he is also making the more subtle point that any action you make in the past or present, will catch up with you and affect you in the future. It is a story about the "chickens coming home to roost." The main thing the Miller tries to illustrate the Lomans doing in the past is the fact that they did nothing, that is the reason their family has fallen into disrepair and why the American dream didn't work. Andrew LAMONT 11RP/ 11P ...read more.