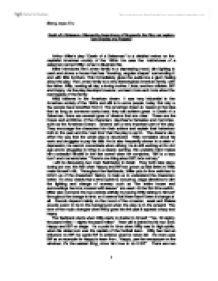 Death of a Salesman: Discuss the Importance of Dreams in the Play and explore how Dreams are Present?

Death of a Salesman: Discuss the Importance of Dreams in the Play and explore how Dreams are Present? Arthur Miller's play "Death of a Salesman" is a detailed review on the capitalist American society of the 1940s. He uses the misfortunes of a salesman named Willy Loman to illustrate this. Miller introduces the Loman family in a depressing mood, dim lighting is used and shows a house that has "towering, angular shapes" surrounding it and with little furniture. This immediately gives the audience a glum feeling about the play. The Loman family is a very stereotypical American family, with the father, Willy, working all day, a loving mother, Linda, and two children, Biff and Happy. As the play develops however, we learn more and more about the real tragedy of the family. Willy believes in the American dream. It was very influential in the American society of the 1940s and still is to some people, today. But only a few people have benefited from it. The American dream is based on the idea that as long as someone works hard, they will achieve great. In Death of a Salesman, there are several types of dreams that are clear. ...read more.

But the complete opposite happens when they finish school and get into the big wide world. Bernard goes onto become part of the Supreme Court. The second flaw is the woman, the secretary whom Willy had an affair with. As when we learn about Willy's affair later in the play, Willy feels very guilty towards Linda as he cheated on her. His guilt is symbolised by the stockings, which he gave away to the woman while Linda is mending her old ones. Willy feels extremely guilty whenever he sees Linda mending her old stockings. He becomes enraged and tells Linda to put the stockings away. Linda however, is not aware of Willy's affair. At several moments throughout the play, 'The Woman's laughter is heard from offstage, usually at times that Willy sees what has become of his life, for example when he sees Linda mending her stockings. These flashbacks are played out to the audience like scenes in real life and often simultaneously - they are only indicated by the actions of the actors. Before we see this flashback, we are very uncertain of what caused Biff to lose all respect for Willy, although we have an idea from conversations near the beginning of the play. ...read more.

Dreams are important in the play for many different reasons. The dreams in the play express the different ideas about the characters. We see the characters in 'real time' and can only understand them when we see past events. We see how the American Dream affects the characters, how their hopes and ambitions affect them and how past events affect them through flashbacks. Miller is trying to make a point, which is that we live in a world that encourages us to have dreams that are further away from our means, and are not achievable, there dreams are not realistic. All of the characters in the play have been affected by their dreams and the dreams of others. Without dreams, life would be terrible, because we all need something to aim for, but our aims need to be reasonable. Arthur Miller has successfully shown how our dreams can go beyond our reach, and does the people around us, as well as ourselves, more damage than good. During the play Charley sums up Willy's life by saying" When the hell are you going to grow up?" Willy spends his life in an illusion, constantly believing that he is a great man who is popular and successful and I truly believe that this is what made Willy loose his sanity, which ended up in tragedy. Shariq Janjua 11U 1 ...read more.