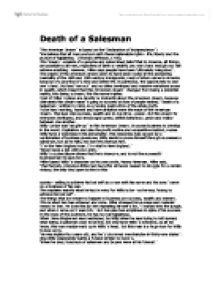 Death of a Salesman - the American Dream

Death of a Salesman 'The American Dream� is based on the 'Declaration of Independence�: 'We believe that all men are born with these inalienable rights - life, liberty and the pursuit of happiness.� (Thomas Jefferson, 1776). This 'dream� consists of a genuine and determined belief that in America, all things are possible to all men, regardless of birth or wealth; you work hard enough you will achieve anything. However, Miller says people have been 'ultimately misguided�. The origins of the American Dream seem to have been rooted in the pioneering mentality of the 18th and 19th century immigrants, most of whom came to America because of a promise of a new and better life. In particular, the opportunity to own one�s land. But land 'ran out� and so cities developed and massive variations arose in wealth, which meant that this 'American Dream� changed from being a potential reality, into being a dream, like the name implies. Most of Miller�s plays are directly or indirectly about the American Dream, because ultimately this dream wasn�t going to succeed as lots of people wished. 'Death of a Salesman� written in 1949, is a moving destruction of the whole myth. ...read more.

This is the error of our whole society.� Willy can�t function as a salesman, also a human being, because he�s not liked. 'Willy�s liked, but he�s not well liked�, is the opinion of other people. Will has been a failure in life. But he feels even more so because of the fact that success in the American Dream is supposed to be available to anyone. This figure has significantly effected his family - especially his sons. Biff is just as hopeless as Willy in a lot of ways. The values of the city are power, brings money. Willy though has never liked the city, and prefers the country, because there is not so much pressure. He is attracted to the wild, free and open countryside. 'The way they boxed us in here. Bricks and windows, windows and bricks.� Willy finds the city very claustrophobic. The lighting effect with leaves and trees are very symbolic. The American Dream has been centrally built around the idea of the family. This is the spiritual side. Biff sums it up, 'We�ve never told the truth for ten minutes in this house. ...read more.

The various lighting effects used in the play were to see how Willy felt, being in the city. He wants to be in the countryside - lighting of leaves and trees. The music involved was clever, because some characters have different instrument and music, to help the audience to realise, in Willy�s 'daydreams�, who it is. Willy�s was a flute. And Ben also has a distinct type of music. The staging was clever too. No walls were in between the rooms. But when it was the present day, people walked through a doorway. But when it was in one of Willy�s 'daydreams� they ignored the walls. Again to allow the audience to be aware of the characters being in real life or in Willy�s 'daydreams�. 'Death of a Salesman� contains much that is critical of modern American society. But, this was not Arthur Miller�s sole purpose in writing it. Willy�s misjudgement of his failure in life is demonstrated in 'Death of a Salesman�. He feels as though he has failed because he has no fortune to show for it, in either his or his son�s names. What he has truly failed in is his family life, and his married life. That is the corruption of the true 'American Dream�. ...read more.