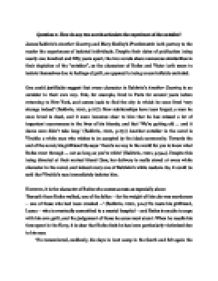 How do &quot;Frankenstein&quot; and &quot;Another Country&quot; articulate the experience of the outsider?

Question 2: How do any two novels articulate the experience of the outsider? James Baldwin's Another Country and Mary Shelley's Frankenstein both portray to the reader the experiences of isolated individuals. Despite their dates of publication being nearly one hundred and fifty years apart, the two novels share numerous similarities in their depiction of the "outsider", as the characters of Rufus and Victor both seem to isolate themselves due to feelings of guilt, as opposed to being uncontrollably excluded. One could justifiably suggest that every character in Baldwin's Another Country is an outsider in their own way. Eric, for example, lived in Paris for several years before returning to New York, and comes back to find the city in which he once lived 'very strange indeed' (Baldwin, 2001, p.227). New relationships have been forged, a man he once loved is dead, and it soon becomes clear to him that he has missed a lot of important occurrences in the lives of his friends, and that 'We're getting old ... and it damn sure didn't take long.' (Baldwin, 2001, p.231) Another outsider in the novel is Vivaldo: a white man who wishes to be accepted by the black community. Towards the end of the novel, his girlfriend Ida says: 'there's no way in the world for you to know what Rufus went through ... not as long as you're white' (Baldwin, 2001, p.344). ...read more.

own infant brother, then allowing an innocent friend of the family to be executed for the crime: 'I was absent when [the murder] was committed, and such a declaration would have been considered as the ravings of a madman.' (Shelley, 2008, p.61) For fear of breaking the hearts of his father, brother and beloved cousin, as well as the consequences he would face when his family undoubtedly questions his sanity, Victor 'resolve[s] to remain silent.' (Shelley, 2008, p.57) Victor suddenly finds himself with a huge burden to bear. Therefore, both Rufus and Victor shun their loved ones in an attempt to hide their secrets, and cope with their terrible remorse and shame. The narrative style of Frankenstein is rather like that of Another Country, as the book is told from several points of view. The novel begins with letters from a ship's captain, named R. Walton, to his sister, in which he tells her his men rescued a man at sea: Victor Frankenstein. The narrator then shifts to Victor, as Captain Walton recounts the tale Victor has regaled him with of creating his monster. Once again, Shelley uses letters to express the feelings of Victor's father and cousin, Elizabeth. Later, when Victor meets the creature he has created in the mountains, it tells him of its experiences; Shelley changes the narrator once again. The reader hears the stories at the same time as the characters, and so the impact of the information is better understood. ...read more.

(Shelley, 2008, pp.39-40) Thus, as Prometheus' knowledge isolated him, so too does Victor Frankenstein's. The title of Baldwin's Another Country is also interesting: as each character could be described as an outsider, one could gather that they all feel as though they live in completely different places despite communally residing in New York City. In the book, we see the black community of Harlem, which sits in the same city as China Town, and Spanish Harlem - in other words, New York can be seen as being comprised of many 'other countries'. There is therefore a sense that Rufus feels that he does not belong in his country: 'He got off at the station named for the bridge built to honour the father of his country ... Then he stood on the bridge, looking over, looking down ... He raised his eyes to heaven. He thought, You bastard ... Ain't I your baby, too?' (Baldwin, 2001, p.93) It can therefore be said that the novel's title underlines its theme of isolation and the outsider. To conclude, James Baldwin and Mary Shelley use several literary techniques to articulate the experience of the outsider. Baldwin's setting of New York City emphasise how alone Rufus is in comparison, whilst Mary Shelley's desolate landscapes echo Victor's isolation well. Also, as both authors use flashbacks, they create a contrast between how the characters used to be and how they are now, giving the reader information gradually as to how Rufus and Victor ended up - as outsiders. ...read more.