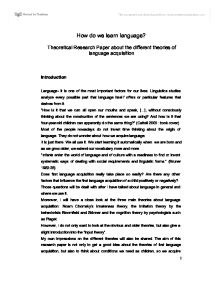 How do we learn language?

How do we learn language? Theoretical Research Paper about the different theories of language acquisition Introduction Language- it is one of the most important factors for our lives. Linguistics studies analyze every possible part that language itself offers or particular features that derives from it. "How is it that we can all open our mouths and speak, [...], without consciously thinking about the construction of the sentences we are using? And how is it that four-year-old children can apparently do the same thing?" (Cattell 2000: book cover) Most of the people nowadays do not invest time thinking about the origin of language. They do not wonder about how we acquire language. It is just there. We all use it. We start learning it automatically when we are born and as we grow older, we extend our vocabulary more and more. "Infants enter the world of language and of culture with a readiness to find or invent systematic ways of dealing with social requirements and linguistic forms." (Bruner 1983:28) Does first language acquisition really take place so easily? Are there any other factors that influence the first language acquisition of a child positively or negatively? Those questions will be dealt with after I have talked about language in general and where we use it. Moreover, I will have a close look at the three main theories about language acquisition: Noam Chomsky's innateness theory, the imitation theory by the behaviorists Bloomfield and Skinner and the cognition theory by psychologists such as Piaget. However, I do not only want to look at the obvious and older theories, but also give a slight introduction into the "input theory". My own impressions on the different theories will also be shared. The aim of this research paper is not only to get a good idea about the theories of first language acquisition, but also to think about conditions we need as children, so we acquire language well. ...read more.

(Bruner: 33) Chomsky believes that there was neither special communication to an adult nor nonlinguistic knowledge of the world needed to learn a language (cp. Bruner: 33). The only condition for language learning is the exposure to it. In other words, Chomsky says that there is a child's competence that is there from the start, which is innate, and performance, which is the realization of language in utterance of speech. Therefore, we are born with a set of rules in our heads. Bruner thinks of Chomsky's assumption as extreme, but also as a means of freeing "a generation of psycholinguists from the dogma of association-cum-imitation-cum-reinforcement." (Bruner: 33) Some people mistake Chomsky's innateness theory as the claim that we are born with language. That cannot be said in this way. In Chomsky's opinion, the LAD is "a series of syntactic universals, structural properties universally found in all languages." (Linguistics 201) Words must be learned, we are not born with a large set of vocabulary in our heads. Only the syntactic structures of the LAD are inborn. We are born with the curiosity of language and with the ability to learn the language that is spoken around us. Thus, "children generate sentences based on learned words and innate syntactic patterns". The problem with the innateness theory is not the theory itself, because the ability to learn a language is definitely innate, but to decide "what the mysterious language acquisition device actually is." (Linguistics 201) During childhood, there is a period when the human brain is most ready to receive input and learn a particular language. This is known as the critical period. Between the age of two and six language acquisition takes place quite easily. The critical period suggests that every child exposed to language will learn it when it reaches the critical period by the age of six. "If this is true, any child not hearing language during this period not only should not learn to speak but also should not be able to learn to speak" (Dr. ...read more.

We do not have many cases in which children start to learn language after six years old and that is why it is difficult to judge about the critical period hypothesis. Even though many people see Genie's case as prove for the hypothesis, we do not have to believe "in the notion that language capacity atrophies from disuse and cannot be restored after a "critical period"." (Laughlin: 52) 6. Conclusion The way communication takes place and the quality of input between the child and his or her parents must account "for how language comes to be learned." (Painter 1989: 7) I am glad that there are some researchers and results that underline the importance of parental input. Spolsky (1979:175) mentions in his comparative study of first and second language acquisition that "children in U.S. middle-class homes produce more sounds than lower income children." That indicates that social class can also influence first language acquisition. Especially after the case of Genie, I believe that parental input and "exposure to language at a certain stage in the child's development" (Curtiss 2004: 140) play an important role. In my view, you cannot explain first language acquisition with just one theory. Language itself is very multi-faceted and language learning is a complicated and long process. In my opinion, the existence of many external factors does not have to be judged negatively, but rather seen as an advantage and a chance for the development of first language acquisition. Many additional factors can influence many different ways of improving and learning language. Maybe one factor can substitute another missing factor and leads to compensation. I think that nowadays many things are possible and we can hope that there are ways to acquire language also after the critical period. At least, we know that, even after extreme situations, the chances of learning some language skills are high and I believe that this is something to be proud of, too. Actually, it is praise to the intelligence of humans and the methods of language teaching. 7. ...read more.