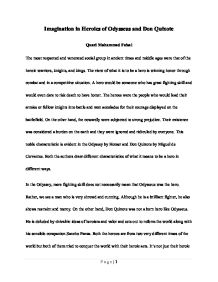 Imagination in Heroics of Odysseus and Don Quixote. Both the authors draw different characteristics of what it means to be a hero in different ways.

Imagination in Heroics of Odysseus and Don Quixote Quazi Mohammad Faisal The most respected and venerated social group in ancient times and middle ages were that of the heroic warriors, knights, and kings. The view of what it is to be a hero is winning honor through combat and in a competitive situation. A hero would be someone who has great fighting skill and would even dare to risk death to have honor. The heroes were the people who would lead their armies or fellow knights into battle and won accolades for their courage displayed on the battlefield. On the other hand, the cowardly were subjected to strong prejudice. Their existence was considered a burden on the earth and they were ignored and ridiculed by everyone. This noble characteristic is evident in the Odyssey by Homer and Don Quixote by Miguel de Cervantes. Both the authors draw different characteristics of what it means to be a hero in different ways. In the Odyssey, mere fighting skill does not necessarily mean that Odysseus was the hero. Rather, we see a man who is very shrewd and cunning. Although he is a brilliant fighter, he also shows restraint and mercy. On the other hand, Don Quixote was not a born hero like Odysseus. He is deluded by chivalric ideas of heroism and valor and sets out to reform the world along with his sensible companion Sancho Panza. ...read more.

And it does not end here since he realized he and his family is still not out of danger as the companions of the dead suitors will look for revenge and finally he triumphs over them as well. In any other story of epic, the hero would have not taken all this trouble of hide and seek play. They would have rather come straight to confront their opponents and beat them after a fierce battle and triumph. It is the wit, intelligence and the vision that distinguish him from many other epic heroes. In contrast to Odysseus, Don Quixote is not just another epic hero. He is not a youthful and strong knight or warrior who goes to a battle, fight fiercely and conquers them eventually. He is rather a man who has passed the prime of youth and now living in his middle ages. He has never gone to any battle or knight-errant, neither does he has any prior experience to fight. In Don Quixote's time, reading was the only entertainment in the home. Most people weren't very well educated anyway so some could not tell the difference between pretend and reality. That is probably why people who read the bible took it so literally. The clergymen were more educated and knew how to take advantage of the people. People were so afraid of what it had to say; they did whatever it said so they would be doing well (Madariaga, 1928). ...read more.

The character Don Quixote is real, and he lives in a real world, but everything that he sees is exaggerated in his mind. He engages in so many adventures that he is convinced that he is doing brave and honorable acts of chivalry, when he is only a silly man running around the countryside. Odysseus on the other hand is very unlike Don Quixote and many heroes who seem invincible. They have no life, no feelings, no weaknesses. Odysseus feels pain, frustration and grief but at the same time his family and friends and those relationships and emotions are what make him like every person. He is brave and strong person, who is also very human. And above all it's his ability to read a situation and use of his imaginative power to sort the best out of it. A large number of his adventures show his cool and calm nature and clear vision that makes him unlike most of the Greek epic heroes. So, we find here two different characters with two different attitudes to the world. Where Odysseus seems very practical and goal oriented, Don Quixote on the contrary is very much like a child and often seems very bizarre as a hero due to his uncanny behaviors. However, it's the use of the imagination that actually draws the line of distinction between their heroics. Odysseus lives and conquers in a world where the daemons live along with the evil people and he fights them all with his might and wit. But Don Quixote has actually created a world which does not really exist in reality; it exists only in his dreams. ...read more.