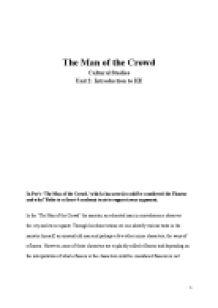 In Poes The Man of the Crowd, which character(s) could be considered the Flaneur and why? Refer to at least 4 academic texts to support your argument.

﻿The Man of the Crowd Cultural Studies Unit 2: Introduction to HE In Poe?s ?The Man of the Crowd,? which character(s) could be considered the Flaneur and why? Refer to at least 4 academic texts to support your argument. In the ?The Man of the Crowd? the narrator, an educated man in convalescence observes the city and its occupants. Through his observations we can identify various traits in the narrator himself, an unusual old man and perhaps a few other minor characters, the ways of a flaneur. However, none of these characters are explicitly called a flaneur and depending on the interpretation of what a flaneur is the characters could be considered flaneurs or not. To comprehend to what extent each of these characters are essentially flaneurs, the essay is going to analyse the actions of the characters in the story as well as the different opinions of what a flaneur actually is. The characters that will be taken into consideration in the essay will be solely male, The flaneur?s freedom to wonder at will through the city is an exclusively masculine freedom, (Wilson, E. ...read more.

The only time it occurs to the narrator that he can observe people further if he were outside, is when he has his attention captured by the old man, who is moving away from his sight. The narrator leaves the café to follow one particular man and not to continue observing the crowd. The flaneur possesses a power, it walks at will, freely and seemingly without purpose, but simultaneously with an inquisitive wonder and an infinite capacity to absorb the activities of the collective. (Jenks, C. 1995, p.146) The narrator does not walk at will, but closely follows the old man, with the sole purpose of understanding him and not the “collective” or how people react to the old man as an outsider of society. Therefore, the narrator can be considered a flaneur only until he starts shadowing the old man. That is how flaneur is to be appreciated. He is to be watched, not spoken too. To understand him, you must learn ‘the art of seeing’ which is to become paralytic. (Sennet, R. 1977, p.213) The narrator’s curiosity for the way the old man walks through London is just an observation of the ways of a flaneur but he is not being one. ...read more.

Rather, loitering is his trade. (Buck-Morss, 1991, p.306) They make a living out of observing people and interpreting them quickly. Of course this is not what a genuine flaneur would do, but exploiting this ?trade? and becoming an ?hawk? most probably makes them the most accurate interpreters of the crowds. Moreover, they have little interaction with the people surrounding them as they are outsiders of the middle and upper classes that they steal from and observe daily, just like a flaneur would be in any class or society. Therefore, the narrator can be considered a flaneur even if he does not know he is being one, until he starts following the old man. As for the old man himself, the motivations that drive him to act as a flaneurs are so concealed that it could be anything from actually being a flaneur to madness, having lost someone or something, perhaps having committed a crime and feeling guilt or even grieving and walking through the city to evoke memories. To a certain extent we can consider the pick-pockets, gamblers and pedlars, to be flaneurs but since they have a lucrative aim and not one of research and to experience the crowd they seem to merely be very acute observers who use the skills of a flaneur to survive. ...read more.