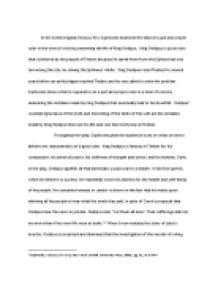 In the Greek tragedy Oedipus Rex, Sophocles examines the idea of a just and proper ruler in the time of crisis

﻿In the Greek tragedy Oedipus Rex, Sophocles examines the idea of a just and proper ruler in the time of crisis by presenting the life of King Oedipus. King Oedipus is a just ruler that is beloved by the people of Thebes because he saved them from the Sphinx that was terrorizing the city, by solving the Sphinxes? riddle. King Oedipus ruled Thebes for several years before an awful plague reached Thebes and he was called to solve the problem. Sophocles shows what is required to be a just and proper ruler in a time of crisis by examining the mistakes made by King Oedipus that eventually lead to his downfall. Oedipus? constant ignorance of the truth and his testing of the limits of free will are the mistakes made by King Oedipus that ruin his life and cost him his throne at Thebes. Throughout the play, Sophocles gives the audience clues on what we are to believe are characteristics of a good ruler. King Oedipus is famous in Thebes for his compassion, his sense of justice, his swiftness of thought and action, and his honesty. Early in the play, Oedipus signifies all that Athenians would want in a leader. In his first speech, which he delivers to a priest, he repeatedly voices his distress for the health and well-being of his people. ...read more.

This is perhaps why Jocasta feels she can tell Oedipus of the prophecy that her son would kill his father, and Oedipus can tell her about the analogous prophecy given to him by an oracle, and neither feels compelled to talk about the coincidence. Oedipus also hears the story of Jocasta binding her child’s ankles, and does not think of his own swollen feet. She said “As for the child, it was not three days old When Laius fastened both its feet together and had it cast over a precipice.”[5] While the information in these speeches is largely intended to make the audience aware of the tragic irony, it also emphasizes just how desperately Oedipus and Jocasta do not want to speak the obvious truth: they look at the circumstances and details of everyday life and pretend not to see them. Sophocles poses the question of whether it is more important to know the truth, no matter how gruesome it may be, or to be oblivious and naïve. Sophocles obviously thinks that knowing the truth is more valuable of a virtue even if it shows a person something that they do not wish to see. Sophocles uses his King Oedipus’ vision as a metaphor that he eventually loses at the end of the play when he pokes his eyes out and blinds himself as he learns the truth that he murdered his father and slept with his mother: the oracle’s prophecy did in fact come true. ...read more.