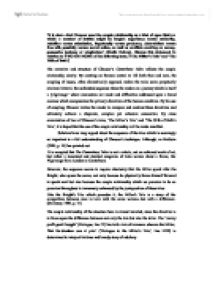 'It is clear...that Chaucer used the couple relationship as a kind of open field on which a number of battles might be fought

'It is clear...that Chaucer used the couple relationship as a kind of open field on which a number of battles might be fought: experience versus authority, rebellion versus submission, impetuosity versus prudence, determinism versus free will, passivity versus moral action, as well as conflicts centring on money, possessive jealousy or utopianism'. (Sheila Delany). Discuss this statement in relation to TWO OR MORE of the following texts. ('The Miller's Tale' and 'The Wife of Bath') The narrative and structure of Chaucer's Canterbury Tales reflects the couple relationship clearly. By centring on themes central to life both then and now, the coupling of issues, often diametrically opposed, makes the tales seem perpetually relevant. Overall, the unfinished sequence takes the reader on a journey which is itself a 'pilgrimage' where encounters are made and difficulties addressed upon a broad canvass which encapsulates the primary directives of the human condition. By his use of coupling, Chaucer invites the reader to compare and contrast these directives and ultimately achieve a disparate, complex yet cohesive connective. By close examination of two of Chaucer's tales, 'The Miller's Tale' and 'The Wife of Bath's Tale', it is hoped that the use of the couple relationship will be made manifest. Scholars have long argued about the sequence of the tales which is seemingly so important to a full understanding of Chaucer's technique. Although, as Baldwin (1995, p. 14) has pointed out: It is accepted that The Canterbury Tales is not a whole, not an achieved work of art, but rather a truncated and aborted congeries of tales woven about a frame, the Pilgrimage from London to Canterbury. ...read more.

The fact that Chaucer consigns the Wife's tale to the realm of Chivalric Romance, suggests a connective between not only what might be seen as a link with the comparatively exalted tale of the Knight but also with the difference between life as experienced and as dreamt. Moreover, this is the world of Arthur, archaic and legendary even at the time of Chaucer, and therefore embedded within a collective consciousness of Chivalric honour which is in stark contrast to the harsh realities of the experiences related in the Wife's prologue. In this way, Chaucer develops a further level to the couple relationship via the difference between experience and romance as well as the ever-present battle between the sexes. Of course, the Wife's Prologue is perhaps more important than the tale which it in many ways simply completes. A strong woman, the Wife has nevertheless been subject to physical abuse and the subject of infidelity. However, this must be qualified by saying that the Wife is not portrayed as a victim in any sense, either by the narrator or herself, she is, in fact, the ultimate survivor and an early example of the strength women could embody, a believer in 'experience [rather than] auctoritee' ('The Wife of Bath's Prologue', line 1). Immediately, Chaucer sets up a couple relationship which the Wife's Prologue and Tale will develop. There is always a sense in which, however, what is said is not entirely what is meant: Thinkers in the Middle Ages and today share the realization that, in fact, we never actually connect with each other at all, that we can never do better than to share words and ideas imperfectly, inexactly. ...read more.

It was brave of him to launch such insidious attacks, especially as he also challenges entrenched status, despite being related to the Court by marriage and decidedly a man who climbed the social ladder. In conclusion, it true to say that whilst Chaucer's immediate directive may not have been to develop the couple relationships which are so clearly, if often subliminally, defined, it is nevertheless an essential part of his overall achievement that the diversity of these relationships remains so relevant. Chaucer's society was one constantly beset by change, challenge and mobility and areas previously thought to be the province of only the aristocratic became accessible by what we would now term the middle-class, even a 'meritocracy'. The tales' couple relationships show that this fluidity became resonant in the Literature of the time to an extent that was not repeated in such wide measure until the Victorian era. The directive of the couple relationship allows him the freedom to explore areas of life which had hitherto been left unchallenged, and despite the distance of several hundred years remains the principal reason why his issues remain current notwithstanding them being delivered via archaic characters with which we have only the perpetual difficulties of the human condition in common. Perhaps because of the enduring humour of the tales, too, it is impossible to imagine that Chaucer's pilgrimage will ever cease to invite the contemporary reader to travel with it towards not a final resolution, but a perpetual quest wherein the couple relationship develops beyond the restrictions of historicity to a modern imperative. ...read more.