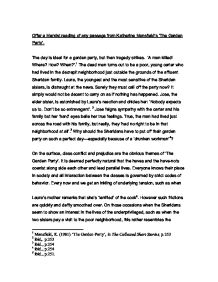 Offer a Marxist reading of any passage from Katherine Mansfield's 'The Garden Party'. The day is ideal for a garden party, but then tragedy strikes. 'A man killed! Where? How? When?'.1 The dead man turns out to be a poor, young carter who had lived in the decrepit neighborhood just outside the grounds of the affluent Sheridan family. Laura, the youngest and the most sensitive of the Sheridan sisters, is distraught at the news. Surely they must call off the party now? It simply would not be decent to carry on as if nothing has happened. Jose, the elder sister, is astonished by Laura's reaction and chides her: 'Nobody expects us to. Don't be so extravagant'. 2 Jose feigns sympathy with the carter and his family but her 'hard' eyes belie her true feelings. True, the man had lived just across the road with his family, but really, they 'had no right to be in that neighborhood at all'.3 Why should the Sheridans have to put off their garden party on such a perfect day-especially because of a 'drunken workman'4? ...read more.

Mrs. Sheridan, noticing her younger daughter's internal conflict and grasping the dangers of its consequences, attempts to bring her back into the fold by distracting her with a fancy hat. Laura puts it on, but refuses to look at herself in the mirror, at which point, the Family Ideological State Apparatus7 is invoked: her mother admonishes her against spoiling the rest of the family's enjoyment. Yet, the 'hat trick' does eventually pay off. Later, alone in her room, Laura gazes at the mirror and becomes enchanted by her reflection. She suddenly sees herself through the eyes of her family and her social class: a charming, young upper class lady. Althusser would interpret this as an 'imaginary distortion' 8 of Laura's relationship to the real word. For Laura, however, the distorted image supplants the tragic reality of the widow and her children and becomes the 'truth'. Her mirror identity is further reinforced and subsumed within ideology as she is repeatedly 'interpellated' 9, or addressed in the form of compliments lavished upon her by her family and other guests: 'My word, Laura! ...read more.

Laura notices how serene, content and beautiful he looks. She is deeply moved and tries to derive some consolation from this scene. There is a suggestion that death transcends the baseness of material possessions. However, this attempt at exoneration is short-lived and Laura becomes all too aware of the realities of the here and now, and her helplessness in the face of the status quo. Finally, all she can do is blurt, 'Forgive my hat',11 to the dead man, before running out of the house and into the arms of her brother. In the end, the hat and her brother's arms come to signify the shackles of the ideology, which Laura is unable to overthrow. Overcome with emotion, 'Isn't life,' she sobs, 'isn't life - '. 12 But she is unable to finish her sentence. She doesn't need to: the brother understands what she is trying to say, as do we. This is simply the way things are, how they have always been, and how they will continue to be. ...read more.