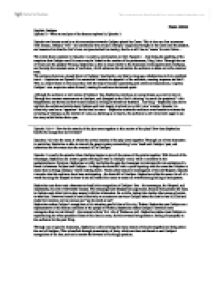 Oedipus - Write an analysis of the themes explored in Episode 2.

Hagen Dittmer English, Oedipus Episode 2 - Write an analysis of the themes explored in Episode 2 Episode two focuses mainly on the accusations towards Oedipus placed by Creon. This is also our first encounter with Jocasta, Oedipus' wife - she continually tries to quell Oedipus' suspicions brought on by Creon and the prophet, and reassure him that the God's have not pre-decided his destiny; that he is still free to 'create' his own future... The initial theme explored in Episode 2 is really a continuation on from Episode 1 - that being the sparking of the suspicion that Oedipus could in some way be linked to the murder of his predecessor, King Laius. Through the use of Creon and the prophet Tiresias, Sophocles is able to create doubt in the characters minds (particularly Oedipus), and develop the constant sense of confusion, which enhances the adventure the audience is taken on to the eventual truth. The audience however, already know of Oedipus' fate/destiny, and that he long ago, unbeknownst to him, stumbled into it - Sophocles use Episode 2 to somewhat 'moisten the appetite' of the audience, creating suspense and thrill. ...read more.

With the aid of the messenger, Sophocles can create a great swelling of want in Oedipus' mind, which is mirrored in the reader/audience. However, Sophocles is tricky just before he gets the messenger to insinuate the non-existence of a blood tie between Polybus and Oedipus - he begins the downfall with a quick uprising with the news that Polybus is dead; then he brings Oedipus' world crashing down. Finally after intensive interrogation of the old Shepard, Episode 4 reveals what the audience have been anticipating - the downfall of Oedipus. Sophocles milks this scene for all it's worth by using the Shepard to draw it out and extend the scene to create an overwhelming feeling of anticipation. Sophocles uses three main characters to handle the recognition of Oedipus' fate - the messenger, the Shepard, and importantly, his own wife/mother Jocasta. The messenger and Shepard are significant, because they present the facts to Oedipus and allow him to play around with the information for a while, letting him decide what course of action to take next. ...read more.

The ideas in the ode are explored in chronological order, from the encounter with the Sphinx to Oedipus being "dragged in to the light" - al being revealed, the "dirge" that "comes pouring fourth". A central point to the ode is its reference to the 'pollution' Oedipus has brought upon the city of Thebes, and the "night" he has brought "down upon (their) eyes" - the strong feeling of shame the citizens feel towards him. The chorus do a big run on the incest that has occurred right before their eyes, adding to the shame of the whole affair. It is almost as though the people of Thebes feel deceived by Oedipus, even though he really had no control himself, over what was to transpire. The ideas explored in the ode all relate back to the central point of the play and the source of all that goes wrong for Oedipus, that being the curse. This is simply the final result of the curse; all that has gone wrong is summed up in the ode - every idea explored in the ode is central to the play. It is the cursed journey that was Oedipus' life. ...read more.