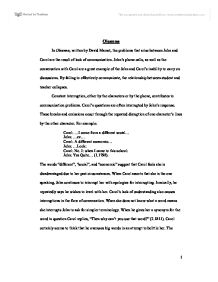 Oleanna In Oleanna, written by David Mamet, the problems that arise between John and Carol are the result of lack of communication. John's phone calls, as well as the conversation with Carol are a great example of the John and Carol's inability to carry on discussions. By failing to effectively communicate, the relationship between student and teacher collapses. Constant interruption, either by the characters or by the phone, contributes to communication problems. Carol's questions are often interrupted by John's response. These breaks and omissions occur through the repeated disruption of one character's lines by the other character. For example: Carol: ...I come from a different social... John: ...ev... Carol: A different economic... John: ...Look: Carol: No. I: when I came to this school: John: Yes Quite... (1.1798). The words "different", "social", and "economic" suggest that Carol feels she is disadvantaged due to her past circumstances. When Carol asserts that she is the one speaking, John continues to interrupt her with apologies for interrupting. ...read more.

From the start, Carol and John fail to understand each other. This misunderstanding continues throughout the remainder of the play. Carol first comes to John's office because she is having problems in his class. She seeks his help in order to understand his course on higher education. When John asks, "What don't you understand?," Carol replies, "Any of it" (1.1799). John goes on to explain the course, but Carol repeatedly interrupts him with questions such as "What?" and "Why?". She reveals to him that one of her main problems with his course involves "The language, the things that you say" (1.1797). Even though she starts to ask insightful questions, Carol continues to admit a lack of understanding for everything John says. In the second and third scenes of the play, the misunderstanding develops from differing views that constitute harassment. Carol believes that some of John's words and actions are sexually motivated. She claims that John "Told a rambling, sexually explicit story...moved to embrace said student...said he 'liked' me. ...read more.

It's John's wife Grace. John tells Grace "I can't talk to you now Baby. (To Carol) Get Out" (3.1822); Carol asks if it's his wife, to which he responds that it is not her business. John again tells her to go. On her way out, Carol says"...and don't call you wife "baby"" (3.1822). He asks, "What?" and Carol repeats her command. Carol's comments have finally pushed John past the breaking point. As Carol begins to leave the room, John grabs Carol and begins to beat her. He calls her a "vicious little bitch,"(3.1822) which is destroying his life; he knocks her to the floor, and can't believe she thought he was trying to rape her. John picks up a chair as if to hit her with it, calling her a "little cunt"(3.1822) that he would never touch. As she cowers beneath him, he lowers the chair, arranges things on his desk, and tries to regain control and composure. It is distressing that John and Carol are so incapable of communication that John must resort to physical violence in order to express himself. This failure in communication is the cause of John's downfall and the ruin of the relationship between teacher and student. ...read more.