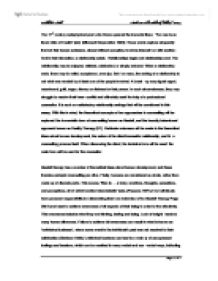 The 17th century metaphysical poet John Donne penned the immortal lines: "No man is an Iland, intire of it selfe" (sic) (Microsoft Corporation 1998). These words capture eloquently the fact that human existence, almost without exception, involves interaction with another. And in that interaction, a relationship exists. Relationships begin and relationships end. The relationship may be enjoyed, relished, celebrated, or simply endured. When a relationship ends, there may be relief, acceptance, even joy. But for many, the ending of a relationship is not what was wanted by at least one of the people involved. A break-up may signal regret, resentment, guilt, anger, dismay or distress for that person. In such circumstances, they may struggle to resolve their inner conflict and ultimately seek the help of a professional counsellor. It is such un-satisfactory relationship endings that will be considered in this essay. With this in mind, the theoretical concepts of two approaches to counselling will be explored: the humanistic form of counselling known as Gestalt, and the broadly behavioural approach known as Reality Therapy (RT). Particular reference will be made to the theoretical ideas about human development, the nature of the client/counsellor relationship, and the counselling process itself. ...read more.

cites the work of many authors and eloquently concludes that: Many contemporary counsellors place increasing emphasis on factors such as presence, authentic dialogue, gentleness, more direct self-expression by the counsellor, decreased use of stereotypic exercises, and a greater trust in the client's experiencing. This moves the focus well and truly away from the utilisation of pre-planned techniques and much more towards the counsellor being with the client "in the moment". It reflects the existential (here and now) nature of the Gestalt approach. The approach could be considered phenomological, since it is concerned with the client's perception of reality (Manchester Gestalt Therapy 2001). The counsellor would adopt this approach with the client whatever the reason for her being there, and would certainly be appropriate for problems related to a relationship ending. Available texts on RT say little about the nature of the client/counsellor relationship. Typically, it is stated how the counsellor must create a "trusting environment" (WGII 2001), although there is little that details how this environment is to be achieved. Corey (1996) expands the theme only slightly by stating how the counsellor can create a "therapeutic climate" by the use of listening skills and skilful use of questioning. ...read more.

He would help her to identify actions that might eventually lead to more positive feelings and physiological functioning, and to explore the extent to which the client sees herself as a victim in the scenario. By utilising listening skills and questioning, the counsellor would help the client to examine the degree to which her plan of action is realistic in helping her to gain what she was previously getting from the relationship that has now ended. Both Gestalt counselling and RT place responsibility for behaviour squarely with the client. I believe that the approaches are in many ways different, yet complementary. With Gestalt, the emphasis is on examining the events of the past and enabling the client to express her emotional response to unresolved issues. One could say that this does not in itself emphasise a way forward for the future. Reality Therapy on the other hand, pays little heed to the events of the past and this, I believe, is a weakness. But used in conjunction with an approach such as Gestalt, that explores "unfinished business", the client could be helped to lay the ghosts of the past to rest. She could then move forward with a constructive plan to become a completely whole, truly authentic, and fully aware individual with realistic plans for future fulfilment of her needs. ...read more.