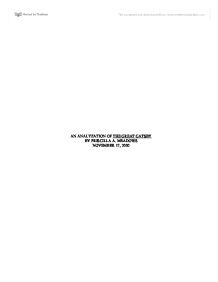 The analyzation of The Great Gatsby.

AN ANALYZATION OF THE GREAT GATSBY BY PRISCILLA A. MEADOWS NOVEMBER 17, 2000 The Great Gatsby written by F. Scott Fitzgerald takes place among the contrast of the neighboring rich and poor. After reuniting with his cousin, Daisy Buchanan, Nick Calloway is thrust into a world in which both rich and poor are miserable and extra marital affairs are common. Not long after meeting Daisy's husband, Tom Buchanan, Nick is soon exposed to the affair Tom is having with Myrtle Wilson. Myrtle Wilson is the wife of auto-mechanic, George Wilson. About this time Jay Gatsby enters the lives of many of the locals as the elusive host to many elaborate parties. Gatsby's interest in Nick eludes him until Jordan Baker enlightens him to the love Gatsby has long felt for Daisy. Jordan is Nicks love interest and a well-known golf champion. As a good friend to Daisy, Jordan has an insight to the feelings that are felt between Gatsby and Daisy. All affairs of the heart come to light one tragic evening and as Gatsby and Daisy leave the others behind Myrtle is killed as she runs across the street. ...read more.

Gatsby's feelings of unwortyness are solidified when Daisy marries wealthy Tom Buchanan not long after Gatsby departs while serving in the military. Gatsby incorrectly assumes that money is all he needs and that the rest will fall into place. Unfortunately with or without money Gatsby cannot have the status and the prestige of old money and Daisy places herself above people with self-made riches. It seems all that Gatsby goes through to attain riches is in vane, for all the money in the world will never suffice in a world like Daisy's. Myrtle Wilson searches for her identity through money. Myrtle evolves into another person when Tom exposes her to a lavish lifestyle. While throwing a party at the apartment she shares with Tom, Myrtle calls a nice dress she is complimented on a "crazy old thing" and says she "slips it on when she doesn't care what she looks like". This statement coming from a woman who resides over a garage is obviously false. Myrtle becomes a spoiled little girl around Tom, acting almost giddy at times with the thought of being bought material possessions no matter what they are. ...read more.

Jordan recalls finding Daisy in a drunken stooper clutching in her hand a letter from Gatsby. Daisy mumbles that she has changed her mind about marrying Tom, yet after sobering up continues with the ceremony not mentioning the incident again. Daisy makes her choice of a husband who was socially more acceptable and decided to forego any possibility of love. I feel Daisy would have never been satisfied; she marries a man who has money and is miserable without love; but had Daisy married Gatsby when she had the opportunity she would have probably been unhappy with out the riches. I have discussed man's search for identity as the theme in The Great Gatsby by F. Scott Fitzgerald. In doing so, I noticed that the characters in this novel never once look inside themselves for contentment. The characters I have discussed, and other in this unique, enter twining novel seek to make themselves hole by attaining sexual conquests, material possessions, and above all wealth. Not surprisingly, none of the characters ever get what they want out of life. Gatsby wants the love of Daisy and instead ends up dead; Myrtle sought to hold on to her rich lover and ends up dead; Tom and Daisy stay unhappily married. Reference Page: NO DIRECT QUOTES. ...read more.