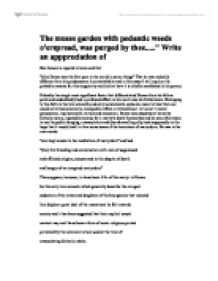 The muses garden with pedantic weeds o'erspread, was purged by thee.....&quot; Write an apppreciation of

The muses garden with pedantic weeds o'erspread, was purged by thee....." Write an apppreciation of Ben Jonson is reputed to have said that "John Donne was the first poet in the world in some things" That he was radically different from his predecessors is unmistakable and in this essay I will explore the probable reasons for this singularity and look at how it is chiefly manifested in his poetry. Probably the single most significant factor that differentiated Donne from his fellow poets and undoubtedly had a profound effect on his work was his Catholicism. Belonging to this faith in the late sixteenth and early seventeenth centuries meant at best that one could not attend university, hold public office or attend Court. At worst it meant persecution, imprisonment, torture and execution. Donne was educated at home by Catholic tutors, reputedly anxious for a martyr's death themselves and he was often taken to see the public hanging, emasculation and disembowelling of priests supposedly in the hope that it would instil in him some sense of the heroicism of martyrdom. He was in his own words "ever kept awake in the meditation of martyrdom" and had "(his) first breeding and conversation with men of suppressed and afflicted religion, accustomed to the despite of death and hungry of an imagined martyrdom" There appears, however, to have been little of the martyr in Donne but his early love sonnets which generally describe the arrogant seduction of the wives and daughters of the bourgeoisie that rejected him display a great deal of the resentment he felt towards society and it has been suggested that their explicit sexual content may well have been a form of socio-religious protest provoked by the common torture used at the time of emasculating Catholic rebels. ...read more.

The absence of the conventional song-like structure does not mean, however, that Donne uses no sense of rhythm in his work. Indeed John Hayward has suggested that punctuation is used rather like rests in musical notation and this seems a very reasonable description of Donne's style, if we look for example at ~The Canonization" with its irregular line lengths and ABBACCCAA rhyme scheme which seem to have no particular rhythm on paper until they are read aloud. The instability and unpolished feel of Donne's verse implies also an immediacy of experience put directly onto paper, and although we realise that Donne was probably not witnessing someone crying as he wrote "A Valediction of Weeping" we feel that he is experiencing the thoughts and feelings connected to this scene as he writes; he has not stopped to refine or consider his thoughts. Johnson also said of Donne "For not being understood, he will perish~ and although this prediction has proved untrue the complexity of both the themes tackled and the poetry itself was one of the chief differences that a seventeenth century audience would have noticed as compared to his predecessors often simple, songlike verse. Donne's frequently obscure references served to prevent many people comprehending his meaning and flattered the intel1igence of those close friends who could. Donne used no classical mythology in his poetry which would have been familiar to his audience, but used complicated metaphysical metaphor and his immense learning is evident in his poetry; he himself refers to his "hydroptique, immoderate desire for learning" However, a lack of a similar understanding of seventeenth century thought does not necessarily significantly inhibit our appreciation of ...read more.

What, then, was it about Donne which made people describe him as a "Copernicus in Poetry" at his funeral? Why did they say that an "awful fire burned in his clear brain"? Donne was not the social rebel he fantasised about being for very long, if indeed at all; nearing the end of his career he was writing almost to order for the Countess of Bedford and the authorities he had so mocked as a young man. He even wrote an epithalamion for the marriage of King James's daughter. Neither were his unusual metric schemes and style enough to earn him the uncommon praise from Jonson of being recognised as incomparable at his best. Rather than being a lone outsider he craved social acceptance and in his sermons condemned those cast out by society. Donne's true singularity and genius must be seen in his use of poetry as a medium to discuss and analyse the "The new philosophy (which) calls all into doubt" and the huge questions and conflicts it caused in his own thinking with the sense of foreboding and frustration it accorded in a world where the old religion and morality were failing to keep pace with scientific progress and social change and a life in which spiritual values were constantly being challenged by the materialistic forces of the day. His appeal to our sense of isolation in an uncaring and unexplained world and the relevance of these battles to the centuries following his life, and in particular to our own, have undoubtedly contributed greatly to his enduring popularity. ...read more.