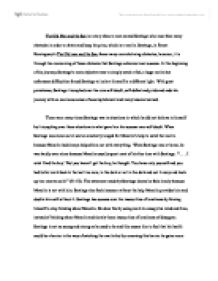 The Old Man and the Sea

The Old Man and the Sea is a story about a man named Santiago who must face many obstacles in order to obtain and keep his prize, which is a marlin. Santiago, in Ernest Hemingway's The Old man and the Sea, faces many overwhelming obstacles; however, it is through the overcoming of these obstacles that Santiago achieves inner success. At the beginning of his journey, Santiago's main objective was to simply catch a fish, a huge marlin but unforeseen difficulties forced Santiago to look at himself in a different light. With great persistence, Santiago triumphed over his own self-doubt, self-defeat and pride and ends his journey with an enormous sense of accomplishment and many lessons learned. There were many times Santiago was in situations in which he did not believe in himself but triumphing over those situations is what gave him his success over self-doubt. When Santiago was alone out at sea he constantly longed for Manolin's help to catch the marlin because Manolin had always helped him out with everything. When Santiago was at home, he was hardly ever alone because Manolin usually spent most of his free time with Santiago. "' . . . I wish I had the boy.' But you haven't got the boy, he thought. ...read more.

He paints a picture in the reader's mind of all the pain Santiago was undergoing but still went on trying to catch the fish. Santiago did not let the pain get in the way of what he wanted and eventually after never giving up he finally got it. Even after Santiago caught the marlin he faced many challenges ahead and fighting the sharks was one of those challenges. "'Fight them,' he said 'I'll fight them until I die'" (115). This type of attitude from Santiago shows the reader that he is a very wilful person. It shows them that although he is still in pain and exhausted after everything he has already gone through he is still willing to fight to keep the marlin. The fact that Santiago would rather give up his life than lose the marlin, which he worked so hard to catch shows the reader his determination to not allow himself to give into self-defeat and just let the sharks win. Instead Santiago continues to fight no matter how tired he is or how much pain he may be feeling. When the sharks had taken away almost all of Santiago's defences to fight them he still continued to try and fight them off. ...read more.

'Neither for you nor for me. I'm sorry fish'" (110). It shows the reader that he realises his mistakes and repents for them. When Santiago first hooked the huge fish he was so determined to catch the fish that he didn't even think twice about what going out so far at sea could've cost him. Santiago felt that no man could ever lose so much at the hands of a fish and he was proven wrong. Santiago's success over pride in this situation allowed him to gain the knowledge of never letting pride get in the way of logical thought. One of Santiago's greatest successes was success over pride because it is what taught him what his limits are and how far is too far. Being able to make mistakes is easy but understanding them and learning from them is the hardest of all but something Santiago was able to accomplish successfully. Santiago's success over the overwhelming amount of obstacles he faced is what made his achievement of inner success worthwhile and lifelong. Success over self-doubt, self-defeat and pride is what taught him to believe in himself and understand his mistakes and capabilities. Some lessons in life in life are hard to learn and others easy, however, Santiago was unfortunate enough to learn them the hard way. The greatest success in life is learning from your mistakes and understanding them so you won't make them again. BY: JOGPREET SEKHON ?? ?? ?? ?? ...read more.