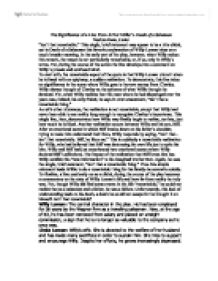 The Significance of a Line From Arthur Miller's Death of a Salesman Neelum Raza, Junior "Isn't that remarkable." This single, brief statement may appear to be a trite clich�, yet in Death of a Salesman this favorite exclamation of Willy Loman takes on a much broader meaning. In the early part of the play, however, when Willy makes this remark, the reason is not particularly remarkable, or, if so, only in Willy's terms. Yet, during the course of the action the line develops into a comment on Willy's prosaic and confused mind. To start with, the remarkable aspect of the quote is that Willy Loman utters it when he is faced with an epiphany, a sudden realization. To demonstrate, this line takes on significance in the scene where Willy goes to borrow money from Charley. Willy always thought of Charley as the epitome of what Willie thought he detested. Yet, when Willy realizes that this man whom he had disparaged over the years was, indeed, his only friend, he says in utter amazement, "Isn't that a remarkable thing." As with other utterances, the realization is not remarkable, except that Willy had never been able to see reality long enough to recognize Charley's importance. This single line, then, demonstrates how Willy may finally begin to realize, too late, just how much he is liked. Another realization occurs between Willy and his son, Biff. After an emotional scene in which Biff breaks down on his father's shoulder, trying to make him understand their lives, Willy responds by saying, "Isn't that-isn't that remarkable. Biff, he likes me." This is suddenly a remarkable realization for Willy, who had believed that Biff was destroying his own life just to spite his him. Willy and Biff had just experienced two emotional scenes where Willy doubted Biff's affections. The impact of the realization that Biff loves him has Willy confide this "new information" to his imagined brother Ben. Again, he uses the single, brief statement, "Isn't that a remarkable thing." ...read more.

He is weary and tired of life on the road. His two grown sons, Biff and Hap have returned home to visit. Biff has lost his way in life and has returned home after 15 years of drifting. Hap, who lives in his own apartment is also home to visit. Willy has a conversation with his wife, Linda, as he gets ready for bed. Willy cannot understand why Biff is lost, with no job and no money to his name. Willy reminisces about the past and the reader sees for the first time that Willy sometimes lapses into another era, when he talks about opening the windshield on his car. Linda suggests Willy go to the kitchen have some whipped cheese before coming to bed. Meanwhile, the boys are having a conversation in their old bedroom. They discuss their father and the fact that he is becoming senile in his old age. They have been on a date, and through their conversation we see that Hap holds himself to low moral standards. They talk about success, their hopes, and all the while Willy is downstairs having a conservation with no one. Willy is immersed in one of his flashbacks, where he relives conversations and scenes from the past. The boys are embarrassed for him, and the scene transforms into a fall day, 15 years ago. pages 41-52 Summary: (Explanation on next page >>) Willy is ranting in the kitchen, and Hap comes downstairs to quiet him down. Willy's mind returns to the present-day. Willy talks of his failure to make the trip to New England. He starts talking about his brother, Ben, now dead. Ben is a mysterious, almost god-like figure, whom Willy idolizes. Ben became rich mining diamonds in the jungles of Africa. Ben had asked Willy to come along, but Willy declined. Willy begins to accuse Hap that he is too free with his money, his women, and his car. ...read more.

I was looking for a fuse. And behind the fuse box was a length of rubber pipe-just short...I knew right away. And sure enough at the bottom of the water heater there's a new little nipple on the gas pipe...I don't know what to do. I live from days to days, boys'" (59). Linda finds inner strength and explodes with anger at her sons and kicks them out of the house for abandoning Willy at the restaurant "'Did you have to go to your women tonight? You and your rotten whores! Get out of here, both of you, and don't come back! I don't want you tormenting him anymore.' She starts to pick up the flowers and stops herself. 'Pick up this stuff, I'm not your slave anymore. Pick it up, you bum, you!'" (124). Linda is the only one who knows what the family needs to survive. "'He [Biff] was crestfallen, Willy. You know he admires you. I think if he finds himself, then you'll both be happier and not fight anymore'" (15). When things with Oliver don't work out for Biff, and he gives up trying to please his father, Linda musters the courage to let go of her son. Biff resigns the fight with Willy and says to Linda "'All right, we [Biff and Willy] had it out. I'm going and I'm not writing anymore. People ask where I am and what I'm doing, you don't know and you don't care. That way it'll be off your mind and you can start brightening up again '"(128). Linda reluctantly responds, considering Willy's wellbeing and the rest of the family, "'I think that's the best way dear. 'Cause there's no use drawing it out, you'll just never get along'" (128). By then end of the play, the reader is convinced that Linda is in fact the deepest character possessing the most mental and emotional strength. Death... makes the reader reconsider their definitions of strengths and weaknesses, and made me realize that although someone may appear weak, if they are satisfied with their situation, then they are in fact not. ...read more.