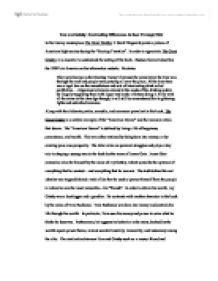 Tom and Gatsby: Contrasting Differences As Seen Through Nick

Tom and Gatsby: Contrasting Differences As Seen Through Nick In his literary masterpiece The Great Gatsby, F. Scott Fitzgerald paints a picture of American high-society during the "Roaring Twenties". In order to appreciate The Great Gatsby, it is essential to understand the setting of the book. Hudson Gevaert describes the 1920's in America on his informative website. He states: They were known as the Roaring Twenty's because the economy at the time was through the roof and people were partying all over the place. At the time there was a legal ban on the manufacture and sale of intoxicating drink called prohibition. ...Organized criminals catered to the needs of the drinking public by illegally supplying them with liquor and made a fortune doing it. Even with all the crime in the Jazz Age though, it will still be remembered for its glittering lights and unbridled romance. Along with the elaborate parties, scandals, and romances prevalent in this book, The Great Gatsby is a notable example of the "American Dream" and the means to attain that dream. The "American Dream" is defined by living a life of happiness, prominence, and wealth. This was either attained by being born into money, or by creating your own prosperity. The latter relies on personal struggles and plays a key role in shaping a young man in the book by the name of James Gatz. James Gatz created an alias for himself by the name of Jay Gatsby, which would be the epitome of everything that he wanted- and everything that he was not. ...read more.

Ever since Gatsby was young, he craved a lifestyle that he never had and went as far as creating an alias to cover up his "inferior" roots. The problem with coming from a family of lower class was never a problem for Tom. Tom Buchanan is practical in the sense that he knows that he can use money and influence to get what he wants. Tom Buchanan buys his way through life and love. Tom and his wife Daisy started out their life together in a very elaborate way. "He came down with a hundred people in four private cars, and hired a whole floor of the Muhlbach Hotel and the day before the wedding he gave her a string of pearls valued at three hundred and fifty thousand dollars (Fitzgerald 82)". Though this seems to be a romantic courting, this actually proves the fact that Tom believes money can buy love and happiness. It is practical for Tom to use his wealth in order to impress Daisy, rather than more complex traits such as personality. Another example of the practical nature of Tom, including his wife, is shown in a scene after Myrtle gets hit by a car and Daisy admitted that she loved Gatsby. Nick states, "They [Tom and Daisy] weren't happy...and yet they weren't unhappy either. There was an unmistakable air of natural intimacy about the picture, and anybody would have said that they were conspiring together" (Fitzgerald 152). ...read more.

It eluded us then, but that's no matter--tomorrow we will run faster, stretch out our arms farther.... And one fine morning" (Fitzgerald 188) - Gatsby's rise to glory and eventual fall from grace became a cautionary tale about the American Dream. But, holding on to dreams, no matter how difficult they are to grasp, is a positive trait. The positive attribute of this characteristic is seen in the poem by Langston Hughes titled "Dreams". It states: Hold fast to dreams For if dreams die Life is a broken-winged bird That cannot fly. Hold fast to dreams For when dreams go Life is a barren field Frozen with snow. This poem emphasizes the fact that you are incomplete and only half-alive when you do not have dreams. However tragic the death of Jay Gatsby is at the end of the book, it can be assumed that Gatsby died a happy man. Gatsby carried his dream to the end of his life pursuing what he lived for: Daisy and everything she stood for. The seclusion of Tom Buchanan's elite world created the breeding ground for his arrogance and materialism. He was able to control his environment because he has a prominent last name and money. Tom did not have to work to be where he is in society, and for that reason Jay Gatsby becomes the likeable character, even though he did illegal things to get in his position. The differences between Tom Buchanan and Jay Gatsby reflect the different social positions, personalities, and opinions of wealthy society. ...read more.