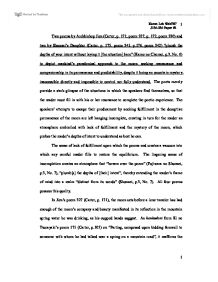 Two poems by Archbishop Jien (Carter, p. 171, poem 327; p. 172, poem 330) and two by Shunzei's Daughter (Carter, p. 175, poem 341; p.176, poem 342) "plumb the depths of your intent without laying it [the situation] bare" (Kamo no Chomei, p.3, No. 6) to depict mankind's paradoxical approach to the moon: seeking reassurance and companionship in its permanence and predictability, despite it being an uncertain mystery, inaccessible directly and impossible to control nor fully understand. The poets merely provide a stark glimpse of the situations in which the speakers find themselves, so that the reader must fill in with his or her resonance to complete the poetic experience. The speakers' attempts to escape their predicament by seeking fulfillment in the deceptive permanence of the moon are left hanging incomplete, creating in turn for the reader an atmosphere embroiled with lack of fulfillment and the mystery of the moon, which probes the reader's depths of intent to understand as best he can. The sense of lack of fulfillment upon which the poems end creates a vacuum into which any careful reader fills to restore the equilibrium. The lingering sense of incompletion creates an atmosphere that "hovers over the poem" (Fujiwara no Shunzei, p.3, No. 7), "plumb[s] the depths of [their] intent", thereby extending the reader's frame of mind into a realm "distinct from its words" (Shunzei, p.3, No. ...read more.

He wonders till he gazes up and his senses seem to drown in the bright gleam of the moon. The reader can imagine that he will follow the gleam of the moon-the moon which is always there, but still subject to mutability and likely to bring sorrow until one arrives at the point of detachment. In Shunzei's Daughter's poem 341 (Carter, p. 175), a lover departs such that his bodily absence creates a vacuum for which the lady tries to compensate by opening the door to let the moonlight stream into the room. The man has his attachments elsewhere, so despite being "reluctant" to leave, there is nothing he can do, and his body allows him to be only at one place at one time. In stark contrast, right after he leaves, the moon floods the lady's room, detached, impartial and fair to all, sharing its infinite light with all beings everywhere. The moonlight automatically streams in through open doors-there is no need to wait, as a woman then had to wait for a lover who might not come. Hence, in place of any explicit sadness the lady might harbor due to her lover's absence, the moon in the sky at the break of day (as well as the lover's absence) ...read more.

Furthermore, due to its inaccessibility, the moon was to past peoples an object of mystery they could neither control nor fully understand. Nevertheless, many, as illustrated by the speakers in the poems, turned towards it for answers and understanding. The moon does not argue, frustrate, or make you wait. Visible from anywhere in the world, its constancy, predictability and amorality make it an easy source of solace, reminiscent of Izumi Shikibu's "What am I to do/if the man I have waited for/should come to me now--/not wanting footsteps to disturb/the snow of my garden court" (Carter, pp.123, poem 218). The empty hands (327), empty mind (330), empty room (341) empty future (342) in all four poems respectively, and the prominent, mystifying, quiet figure of the moon-the paradoxical emblem of mutability and permanence-prove that without "laying it bare," a lingering bareness distinct from the words "plumb[s] the depths of your intent", invoking a reaction. An experience may be eternalized in the words of a poem, but it is what has been left unsaid that triggers the common biological response that ties all humanity. It is the collective resonance by readers across temporal, spatial and situational contexts to the experiences depicted in the poems, and to the universal, ironic attraction to the all-embracing moon that demonstrates the timeless universality of these emotions amongst humanity these past poets illuminate. ...read more.