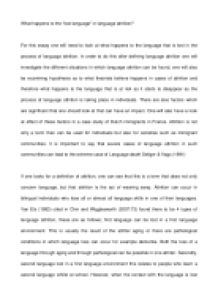 It is also true for the skills that are required for the acquiring of a new language. Receptive skills (e.g. reading and listening) precede productive skills (e.g. speaking and writing) and the reverse is true for language attrition (De Bot et al 2005). Productive skills have been found to be more susceptible to attrition than Receptive skills. This has be found to not only be true with the ?natural? process of forgetting but can also account for pathological conditions in attriters such as dementia. However, caution must be taken as one must remember that more is known about the process of acquisition than of the process of attrition. There are several factors that are which should be looked at that affect the process of attrition. Schmid (2004) argues that the most important factor is age. As it has been suggested that the younger the child is when contact with the language is lost the faster and the most is lost. Tied in with the age factor is the level of education. Pelc cited in Schmid 2004:11 measured this by the number of years in education in Language 1. It was found that more years in education in Language 1 had the impact of slowing down the attrition process. ...read more.

Category leveling is when the concept of a category is extended into another category. Finally it has been found that attriters use category switching this means ?a Category may be maintained conceptually, but is expressed in a different linguistic form? (Seliger & Vago 1991:11). After looking at the evidence including facors affecting attrition and the hypothesis explaining the case of language attrition, one is left with the question; is it possible for a bilingual to lose a language entirely? Sharwood & Smith (1983) cited in Seliger & Vargo (1991). This is the case for the loss of Language 2 in a Language 1 environment. It has been found that it is almost impossible to deactivate a language entirely whilst the other language is being used. The languages that they are able to speak compete in the brain for amount of memory and processing space in the mind. The Activation Threshold Hypothesis supports the improbability of being able to lose a language entirely. This is because it states that a language that has not been used for a while takes a longer time to be retrieved. However, when retrieved recall will become easier and faster for the individual. Despite this, it is possible for individuals to lose a language entirely as is the case of attriters who have experienced physical damage to the brain. ...read more.