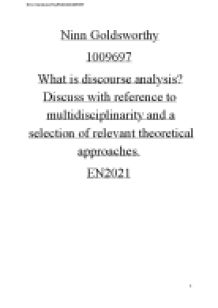 What is discourse analysis? Discuss with reference to multidisciplinarity and a selection of relevant theoretical approaches

﻿Ninn GoldsworthyEN20211009697 Ninn Goldsworthy 1009697 What is discourse analysis? Discuss with reference to multidisciplinarity and a selection of relevant theoretical approaches. EN2021 This essay will try to answer the question of what discourse analysis is and what methods can be used to evaluate the spoken and written word. Dealing with two main example of analysing discourse, written and oral, this essay will provide examples of how these methods of analysing discourse work within the field, and how they link to analysing discourse as a whole. Discourse analysis involves looking behind the written and spoken word and being able to explain the differences between all that is said and written. (Rogers, R. & Mosley, M et al. 2005, Pg: 365). It is a little hard to determine the words discourse analysis accurately as there are several known definitions of discourse. In some definitions, discourse refers to the text that it is written in, or it may be that it denotes speech. (Crystal, 1992, Pg: 91) wrote that: ?Discourse: a continuous stretch of (especially spoken) language larger than a sentence, often constituting a coherent unit such as sermon, argument, joke or narrative? whether written, or spoken, discourse remains an intriguing and fascinating subject. The phrase ?Discourse Analysis? was first introduced in 1952 by Zellig Harri. Harris wrote: Connected discourse occurs within a particular situation ? whether of a person speaking, or of a conversation, or of someone sitting down occasionally over the period of months to write a particular kind of book in a particular literary or scientific tradition (Harris, 1952 as found in Paltridge, 2011, Pg: 2) ...read more.

Benjamin Whorf once said ?Linguistic order embraces all symbolic processes, all processes of reference and logic? (Whorf, 1956. Pg: 134) By analysing the order of which speech is delivered and the references to body language and expression, the analyst can ascertain what hidden, if any, denotation of speech is underlying. The main difference between spoken and written discourse is that writing requires is a vehicle such as a pen and paper and keeps a record of the discourse, whereas all speech requires is air and the human vocal chords. There are other differences, between the two genres, that may not be so obvious, to a non-discourse analyst. A speaker delivers his vocal dialogue at a pace that is suitable for the audience that is listening, even if it may not be to the listeners? comprehension. The listener may ask for repetition. It is incredibly difficult to communicate with someone when all the sentences have to be repeated over and over again. (Upton, T. & Cohen, M. 2009. Pg: 585) . Furthermore, the spontaneity of spoken discourse, can lead to mistakes, repetition, or a lack of coherence. Grunts, stutters, or long, subjective pauses during an address, or delivery of, spoken discourse, may have some sort of meaning. The person speaking may well know the person to whom they speak, or the listeners, to whom they speak, and he or she may be at least aware that their audience is listening. ...read more.