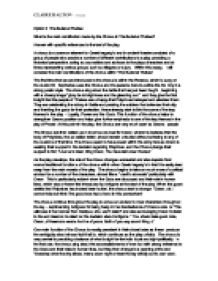 What is the main contribution made by the Chorus in The Burial at Thebes? Answer with specific references to the text of the play.

Option 2 The Burial at Thebes What is the main contribution made by the Chorus in The Burial at Thebes? Answer with specific references to the text of the play. A chorus is a common element to Greek tragedy's and in ancient theatre consisted of a group of people who provide a number of different contributions to a play, providing a historical perspective, acting as counsellors and advisors to the plays characters and at times representing various groups such as villagers or a jury. Within this essay, I will consider the main contributions of the chorus within "The Burial at Thebes" The first time that we are introduced to the chorus is within the Parados, which is sung on the Audio CD. Sophocles uses the Chorus and the parados here to outline the history in a strong poetic style. The chorus sing about the battle that has just been fought, beginning with a cheery image "glory be to brightness and the gleaming sun" and they give the first insight that the people of Thebes are unhappy that Polynices betrayed and attacked them. ...read more.

The chorus continue throughout the play to act as an advisor to most characters throughout the lay - reprimanding Antigone for being hasty in her disobedience of Creons orders "The wildness in her comes from Oedipus, she won't relent" and also encouraging Creon to listen to his son Haemon to relent on his decision about Antigone " You should take good note, Creon, of Haemons words And he of yours. Both of you say sound things". One main function of the Chorus is mostly prevalent in their choral odes as these produce the ambiguity about whose fault it all is, which continues as the play unfolds. The chorus is very central to providing a balance of what is right for the individual and right politically. In the first ode, the chorus sing about the accomplishments of man but with strong reference to the Gods and their roles in human lives, but they then change to a warning at the end "Overstep what the city allows, tramp down right or treat the lay wilfully as his own word, then let this wonder of the world remember, he'll have put himself beyond the pale when he comes begging we will turn our backs". ...read more.

The chorus gave insightful historical and mythical perspectives which provided the structure and context which was essential for this play. A key theme which was continually emphasises by the chorus was loyalty to the gods and the function of the chorus who continually reflected this to Creon, ultimately contributed to his epiphany and change of mind, albeit it too late. In my personal opinion, the key function of the chorus was to keep the audience continually engaged by giving unbiased views and therefore keeping the moral ambiguity heightened at all times. This role meant that the viewer/listener had to attend to the story at all times and make views and decisions based on their own personal views. The chorus never put fault at any ones person door; it gave all sides of the story and allowed people to judge independently. I personally felt that this role was crucial to making this a readable and enjoyable play. There were times when I was somewhat irritated by the chorus interruptions and found sometimes that these detracted from what was a build up in dramatic tension but overall the chorus role was crucial and added to the enjoyment of the play. ...read more.