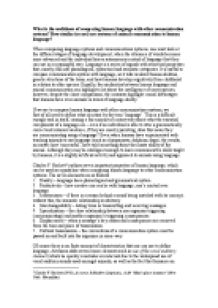 ﻿What is the usefulness of comparing human language with other communication systems? How similar (or not) are systems of animal communication to human language? When comparing language systems and communications systems, one must look at the different stages of language development; when the utterance of words becomes more advanced and the individual has an autonomous control of language that they can use in a meaningful way. Language is a series of signals with structural properties that, mostly, fall into phonological, syntactical and semantic categories. It is useful to compare communication system with language, as it tells us about human abilities, genetic structures of the brain, and how humans develop cognitively from childhood in relation to other species. Equally, the similarities between human language and animal communication can highlight a lot about the intelligence of many species, however, despite the close comparisons, the contrasts highlight crucial advantages that humans have over animals in terms of language ability. If we are to compare human language with other communication systems, we first of all need to define what is meant by the term ?language?. This is a difficult enough task in itself, causing a fair amount of controversy about what the essential components of a language are ? even if an individual is able to utter a grammatically correct and coherent sentence, if they are merely parroting, does this mean they are communicating using a language? Even when humans have experimented with teaching animals to use language (such as chimpanzees, dolphins, dogs), the results, no matter how ?successful?, have told us nothing about the innate ability of the animal. Although they may be intelligent enough to learn communicative skills taught by humans, it is a slightly artificial activity and approach to animals using language. ...read more.

Yet, it can tell us about what the missing links may be within the brain, which allows humans to retain and utilise language. For example, a patient may be unable to retrieve a specific word in their sentence, yet is able to describe the word and offer semantic references, such as ?feathered swimmer? and ?quack? for the word ?duck?. Upon analysing this, it is possible to see the coherence of syntax and application of a grammatical structure, but a delayed ability of semantic references. In light of how much we can learn from comparing human language to animal communication, it would be useful to look at the similarities between the two. Having already defined the term ?language? by identifying the key characteristics, we should be reminded of Hockett?s (1963) emphasis on human language?s criteria of interchangeability and complete feedback. Therefore, it is important to distinguish animal mimicry from the ?true? use of a language. There is a difference between understanding the meaning of language (such as the baby chimp, Gua, who was researched by Kellog in 1933)[5], and the ability to use a language. The latter is notably inhibited by all animals (in terms of vocalised language), as they do not physically have a developed enough oral tracts to produce some sounds used within human language. Even chimpanzees ? who have proved to be the most promising in learning human language ? have poor articulation skills. However, when we look at the communication systems of other animals, it is possible to identify some of the elements of human language. Specialization appears in the communication and behaviour of birds and fish (such as baby birds chirping and opening their mouths to be fed by their parent). ...read more.