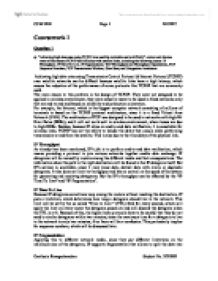 a). “Achieving high data rates using TCP/IP over satellite networks can be difficult”- review and discuss

some of the reasons TCP/IP has difficulty with satellite links, including the following issues: IP

Achieving high data rates using Transmission Control Protocol & Internet Protocol (TCP/IP) over satellite networks can be difficult because satellite links have a high latency, which causes the reduction of the performance of some protocols like TCP/IP that are commonly used.

The main reason to this problem is the design of TCP/IP. They were not designed to be applied in wireless environment, they were actually meant to be used in fixed networks only that are end-to-end and based on reliability and connection orientation.

For example, the Internet, which is the biggest computer network consisting of millions of terminals is based on the TCP/IP protocol architecture, since it is a fixed Virtual Area Network (VAN). The architecture of TCP was designed to be used in networks with high Bit Error Rates (BERs), and it will not work well in wireless environment, where losses are due to high BERs. Besides, because IP relies on end-to-end data verification, it is unsuitable for wireless links.

TCP/IP has congestion control features, which makes the throughput drop when file size decreases, and bit error rate increases. Unless it builds up over a period of time, TCP/IP will not perform a file transfer to start at the speed that is actually allowed by its window. Therefore it uses a technique called “Slow Start” that will find out the throughput capacity of the channel. It simply sends a packet across the channel and waits for a response. If it receives a response it will send the next packet a bit faster than the previous one, and thus 50% more data will be sent in every roundtrip. It will repeat this procedure until it has discovered the maximum speed of the link, i.e. until the packet sent is lost.  This loss of the packets will be interpreted that a congestion is indicated. But there are two problems with the Slow Start technique on high speed networks.

Mike Andrews, “The Development of TCP/IP”