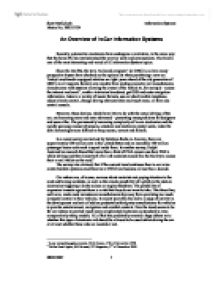 An Overview of In-Car Information Systems.

An Overview of In-Car Information Systems

Recently, automotive electronics have undergone a revolution, in the same way that the home PC has revolutionised the way we work and communicate. The field is one of the most interesting and varied of all information System topics.

Since the late 80s, the term ‘on-board computer’ (or OBC) is an item many prospective buyers have checked on the options list when purchasing a new car. Today’s multimedia equipped vehicles are light-years ahead of the old generation of OBC’s in all respects. Several new models from leading executive car manufacturers already come with systems allowing the owner of the vehicle to, for example - access the internet and email[1], watch a television broadcast, get GPS and route navigation information, listen to a variety of music formats, use an inbuilt mobile telephone, adjust climate control, change driving characteristics and much more, all from one central console.

However, these devices, which have little to do with the actual driving of the car, are becoming more and more advanced – presenting many problems for designers and users alike. The permanently increasing complexity of in-car electronics and the rapidly growing amount of sensors, actuators and electronic control units, make the data increasingly more difficult to keep secure, correct and failsafe.

In a recent survey carried out by Goldman Sachs in America, there are approximately 200 million cars in the United States and an incredible 500 million passenger hours each week is spent inside them. In another survey, Delphi Automotive research found that more than a third of PDA owners use their PDA’s whilst driving and that almost half of all US motorists would like the facility to access their e-mail whilst on the road.[2]

Current in car technology has leaped forward in the few years since the American survey took place and the current trend for European luxury car manufacturers is to use one information system to control the entire operation of the vehicle. This presents major safety concerns and has prompted renewed interest from governments on the subject of car electronic systems and aids.

BMW, the German car builder, was one of the first manufacturers to adopt Microsoft’s Windows CE operating systems in its cars. The current 7-series model was the first car built by BMW built which relied on a central information system for the control of a variety of non-critical functions of the car.

BMW’s design concept was to provide the driver with a clutter free environment, which was not only less confusing to use but also allowed for a more attractive interior layout. Technicians at BMW’s technology centre in Munich broke the driver’s view down into two zones – a driving zone and a comfort zone. The functions most important for driving and safety on the road are all located directly in front of the driver, like in a conventional car. e.g. the steering wheel, accelerator and brake pedals, windscreen washers, indicators and headlight controls. The driving zone also included a push button start and ignition switch. The comfort zone takes control of almost every other non-critical function of the car like climate control, HiFi, television, navigation and car phone etc.

The ‘comfort zone’ functions are all controlled via a central computer running the Windows CE operating system called iDrive. The system is designed to allow the driver (or passenger) to adjust over 700 functions of the car.

‘Taking a look at BMW’s Clever iDrive system… but not for too long!’, Pistonheads.com, 15th of February 2002.
www.pistonheads.com

[4] Pistonheads.com: ‘Taking a look at BMW’s Clever iDrive system… but not for too long!’, 15th of February 2002.www.pistonheads.com