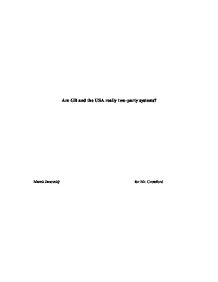 Are GB and the USA really two-party systems?

Are GB and the USA really two-party systems?

The USA and GB are by the majority of people and textbooks considered classical examples of two-party systems. Can we define this way? This paper’s task is to shed light on this statement, analyze the party systems of the mentioned countries and their background.

The paper will also pay attention to party system evolution and will make an attempt to clarify why the system operates the way it does and whether it is prone to be changed or not. Firstly, the discussion is going to concentrate on the USA stating some theoretical points and comments, secondly, Great Britain is going to be on the spotlight.

The first country, whose party structure is going to be discussed is the USA. It is important to define the two-party system, to determine what such a system is based on.

A two party system is a competitive environment in which only two parties have any chance of accomplishing the basic goal of a political party: capturing control of government and nominating the presidential candidate. This clearly shows that what can be seen in the USA can be defined as a two-party system.  The reasons for this are numerous. Leaving

Many state and federal election laws offer a clear advantage to the two major parties. In some states, the established major parties need to gather only a few signatures to place their candidates on the ballot, whereas a minor party or an independent candidate must get many more signatures. Surprisingly, in some states, it is easier to get a new party’s presidential candidate on the ballot than to put a full slate of candidates for  the House of Representatives on the ballot. For example, in Louisiana, no signatures are needed to put a presidential candidate on the ballot, but 125 000 signatures of registered party voters are needed to field an entire House slate. The criterion for making such a distinction is often based on the total party vote in the last general election, penalizing a new political party that did not compete in the election. At the national level, minor parties face different obstacles. All of the rules and procedures of both houses of Congress divide committee seats, staff members, and other privileges on the basis of party membership. So, a legislator elected on a minor-party ticket, such as the Liberal party of New York, must choose to be counted with one of the major parties to get a committee assignment. The Federal Election Commission in charge of campaign financing also places restrictions on minor-party candidates.

Conclusion :( my part, you can add it with your part, or leave it out, as you like, or you can leave it here, at the end of my part, I do not care)

Even though it may not seem that way, it is a tough call to define the US party system. I did not take into consideration the state levels, which would make the evaluation even more divers. I presented a few opinions and facts from which I draw this conclusion: Looking at the national level political party competition, I think there is a competitive two-party system inherent for the USA itself, having only two major players vying for the control of national government. Some countries exhibit what has been called an indistinct two-party system. In the USA political competition at practically all levels, federal, state and local, is between the Republican and Democratic parties. However, party structure differs in major respects from that found in Britain and many other liberal democracies. The two parties do not have distinct ideological differences and are as likely to show intra-party (internal) splits as inter-party ones