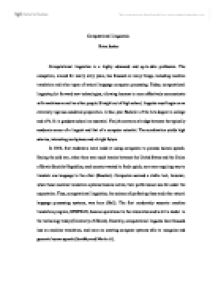 Computational linguistics is a highly advanced and up-to-date profession. The occupation, around for nearly sixty years, has focused on many things, including machine translation and other types of natural language computer processing. Today, computational linguists pilot forward new technologies, allowing humans to more effectively communicate with machines as well as other people. Straight out of high school, linguists must begin on an extremely rigorous academic preparation. A four-year Bachelor of the Arts degree in college and a Ph. D. in graduate school are essential. The job serves as a bridge between the typically academic career of a linguist and that of a computer scientist. The combination yields high salaries, interesting workplaces and a bright future.

In 1946, first endeavors were made at using computers to process human speech. During the cold war, when there was much tension between the United States and the Union of Soviet Socialist Republics, each country wanted to find a quick, non-man-requiring way to translate one language to the other (Baucher).

“What is Computational Linguistics.” University of Zurich. 18 March 2004. <http://www.unizh.ch/cl/CL_Faq.html>