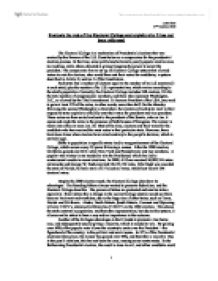 The Electoral College is a mechanism of Presidential elections that was created by the framers of the U.S. Constitution as a compromise for the presidential election process. At the time, some politicians believed a purely popular election was too reckless, while others objected to giving Congress the power to select the president. The compromise was to set up an Electoral College system that allowed voters to vote for electors, who would then cast their votes for candidates, a system described in Article II, section 1 of the Constitution.

Each state has a number of electors equal to the number of its U.S. senators (2 in each state) plus the number of its U.S. representatives, which varies according to the state's population. Currently, the Electoral College includes 538 electors, 535 for the total number of congressional members, and three who represent Washington, D.C., as allowed by the 23rd Amendment. To become President of the USA, you need to gain at least 270 of the votes, in other words, more than half.

The Electoral College seems to be working at the moment, and why should you fix something that isn’t broken?  Even with the horror and outrage over the disputed election in 2000, in which George W. Bush won, despite fewer votes than Al Gore, the shock died down very quickly following Bush’s inauguration, especially after 9/11.

Despite these advantage, weaknesses are also apparent.  The over- representation of states is clear amongst the smaller states.  Wyoming has 3 ECV’s for its population of 500,000, which is 1 ECV for every 165,000 people.  California, on the other hand, has 1 ECV per 617,000 inhabitants.  This disproportionate way of the system gives smaller states a greater say than the deserve, or bigger states get less ECV’s than they should.

The winner takes all system has been criticised for distorting the result of elections.  As the Electoral College system isn’t a representative institute, as a candidate can get the popular vote without actually winning the Presidency, it has distorted the results of many elections.  The 1824, 1876, 1888 and the most recent 2000 election has left the winner of the popular vote without the honour of becoming president.  And, the College can also distort results by seriously allowing giving a candidate more than they deserve.

To actually reform the current Electoral System would be a long and tiring process.  It would require a constitutional reform, which is hard to achieve as smaller states favour the current system as it gives them a greater say than they might actually deserve.  This factor has a huge importance on the decision of changing the Electoral College system.  To achieve a constitutional amendment, 2/3’s of the states need to agree, but this would seem unlikely.  Also, due to the fact George W. Bush and the Republicans came to power in 2000 due to the Electoral College system, it seems they would be reluctant to admit it needs changing, which therefore would undermine Bush’s legitimacy.  The last factor is there is little agreement on what to change it to.  With many ideas and proposals being put forward, it is unlikely that a decision which all states could agree on will ever be put forward.  Most of the current suggestions have flaws and weaknesses, which would be silly to put a critical proposal into place.  At the moment, despite controversy surrounding the Electoral College, it seems a suitable replacement hasn’t been found.  By leaving the College as it is, it seems that it is the sensible option to leave it as the Founding Fathers had made it.