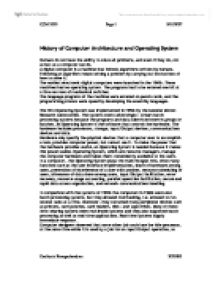 Humans do not have the ability to solve all problems, and even if they do, not as fast as a computer can do.

A digital computer is a machine that follows algorithms written by humans. Following an algorithm means solving a problem by carrying out instructions of how to solve it.

The earliest electronic digital computers were launched in the 1940s. These machines had no operating system. The programs had to be entered one bit at a time on rows of mechanical switches.

The language programs of the machine were entered on punch cards, and the programming process were speed by developing the assembly languages.

The first Operating System was implemented in 1950s by the General Motors Research Laboratories. The systems were called single – stream batch processing systems because the programs and data submitted were in groups or batches. An Operating System is the software that controls the hardware. The hardware includes processors, storage, Input/Output devices, communications devices and data.

Hardware only specify the physical devices that a computer uses to accomplish a task, provides computer power, but cannot use it. To make the power that the hardware provides useful, an Operating System is needed because it makes this power usable. Operating System, which are resource managers, manage the computer hardware and makes them conveniently available to the users.

In the 1970s, the experimental time-sharing systems of 1960s were evolved into solid commercial products. Around this time, Personal Computers (PCs) and microprocessor technology started their early stage.

The TCT/IP communications standards/protocols, which are still in use as the Internet protocol, became widely used mainly in military and universities, since the United States increased the communications between computer systems. In consideration of security problems that occurred, the concept of “encryption” of data became highly important.

1980s was the time of the evolution of microprocessor technology. Through this time, most of the computers were single-processor systems.

Furthermore, because of the maximum usage of personal computers, desktop computers were built to enable users to work individually.
To make the work much easier, application software programs such as word-processors, spreadsheets, database – and graphics packages were published. This took also an important part in the personal computer revolution.

The use of computers increased and almost everyone was able to use one effectively.

Computing became a distributed trend that allowed the execution of parcelled sub-computations on other processors, for example in computer networks, or other multiprocessor systems.

The Graphical User Interface in comparison, displays a pleasant atmosphere with the options of setting wallpapers and screensavers that one can select as per his or her wish, the desired atmosphere. It also provides easy task performance by containing colour graphics. The user just need to click on the images that indicates the program or task he wants the system to perform and it will open up for him. There is no need to remember commands.

Furthermore, looking at the white fonts on a black background all the time will be boring and depressing as well, whereas in a Graphical User Interface you can see a lot more in colour.