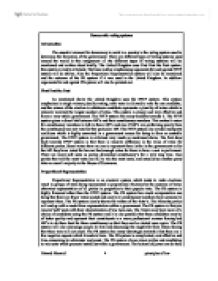 The essential element for democracy to work in a country is the voting system used to determine the formation of the government. There are different types of voting systems used around the world in this assignment all the different types of voting systems will be mentioned and written about briefly. The United Kingdom uses First Past the Post system, this system is vastly criticised. The basic outline emphasising arguments for and against FPTP system will be shown. Also the Proportional Representation system will also be mentioned and the outcome of the PR system if it was used in the United Kingdom. In addition arguments for and against PR system will also be pointed out.

As mentioned above the United Kingdom uses the FPTP system. This system emphasises in single winner plurality voting, each voter is allowed to vote for one candidate, and the winner of the election is whichever candidate represents a plurality of voters which is whoever received the largest number of votes. This system is simple and very effective and forms a very stable government. The FPTP system has many benefits towards it.

The PLS System has a number of variations which can used with it. The simplest PLS System is the closed party system. The closed party system involves voters casting a single vote for a party. Then the nation share a vote which is translated into a directly proportional number of MPs by which each party has a list of candidates, internally drawn up, ordered in preference the allocated candidate’s sit in the House of Commons depending upon the number of seats won by the party. The other PLS System employs multi-seat constituencies and open list systems whereby voters are able to vote either for the party list, or for individual candidates. The PLS System is very simple for voters to understand. There is true proportionality in that every party wins a fair number of seats based upon its share of the vote. The minority parties have some MPs to represent them and everyone's vote counts theoretically. The arguments against the PLS System is that there is no link between MPs and there geographic constituency. The PLS System makes

If party A wants to raise tax, privatise all land and invade their neighbours country the FPTP system will be the best system for them. The FPTP system will give them a majority in parliament and will not need full support from their party to pass the above articles.

The best democratic system for any country to use is the PR system. The PR system clearly expresses the views of the voter and also far more votes are wasted. The Minority parties will end up with a much fairer representation and more MPs to represent there parties. The PR system will remove safe seats. The PR system will make MPs work harder for their litigations to pass. The government will be more