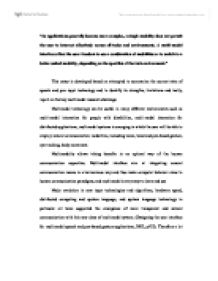 This essay is developed based on attempts to summarize the current state of speech and pen input technology and to identify its strengths, limitations and lastly, report on the key multimodal research challenge.

“As applications generally become more complex, a single modality does not permit the user to interact affectively across all tasks and environments. A multi-modal interface offers the user freedom to use a combination of modalities or to switch to a better-suited modality, depending on the specifics of the task environment.”

This essay is developed based on attempted to summarize the current state of speech and pen input technology and to identify its strengths, limitations and lastly, report on the key multimodal research challenge.

Major evolution in new input technologies and algorithms, hardware speed, distributed computing and spoken language, and spoken language technology in particular all have supported the emergence of more transparent and natural communication with this new class of multimodal system. (Designing the user interface for multimodal speech and pen-based gesture applications, 2002, p422).

However, there are several limitation for the multimodal system, which is  speech and pen input systems are not cost effective in other word still relatively expensive, both in terms of software, additional hardware needed and memory requirements, some care is needed before deciding that speech and pen input will benefit a particular user. And multimodal interface system needs to adapt so that their robustness can be enhance. Therefore there are two candidates for system adaptations are user-centered and environmental parameters.