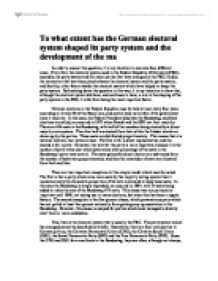 National elections in the Federal Republic must be held at least every four years according to Article 39 of the Basic Law, and can be held more often if the government loses it majority.  In this case, the Federal President dissolves the Bundestag, and fresh elections are called, as occurred in 1972 when Brandt and the SPD lost their majority.  There are 656 seats in the Bundestag, with half of the members being elected by a direct majority vote system.  The other half are elected from lists within the Länder which are drawn up by the parties.  These seats are distributed proportionately.  This means that at a national election, two votes are cast.  The first is for a direct representative, and the second is for a party.  However, the vote for the party is more important, because it is the number of party votes cast which determines what percentage of the seats in the Bundestag a party may control.

Secondly, the system of proportional representation has led to the need for coalition governments.  As is often the case in a proportional system, it very hard in the FRG for any one party to achieve an overall majority.  Indeed this has only been achieved once, by the CDU/CSU in 1957.  The net result of this is that the FDP is far more important and influential, as the third party, than its share of the vote would indicate.  For example, between 1969 and 1982, SPD voters were often encouraged to split their votes, assigning the first vote to the SPD and the second to the FDP.  This was because the SPD could not govern on its own, and so needed to keep the FDP in the Bundestag.  The only way to do this was to make sure that the FDP achieved at least 5% of the vote.  The electoral system, then, ensures the survival of the FDP and thrusts it into a position of prominence despite its small size.

There are, however, numerous other factors which have a significant effect on the party system that have nothing to do with the electoral system.  In answer to the claim that the electoral system prevents the emergence of numerous splinter groups and small parties, it could be argued that such parties would be unlikely to gain a following in Germany anyway.  This is partly due to the role of the Federal Constitutional Court, which is empowered under article 21 of the Basic Law to ban outright any party which is deemed to be anti-democratic.  This power has been used twice, to ban the Socialist Reich Party and the Communist Party in the 1950’s, and there is currently debate over whether the NPD should also be banned.

It is also worth mentioning the massive changes which have taken place in ideology across Europe, and arguably much of the world, in the 1970’s, 80’s and 90’s.  Increasingly the old materialist concerns are giving way to new, post-materialist concerns, and this is reflected in the current shape of the German party system.  The Green Party is an example of a party which has no connection with the previous materialist concerns, but is based on environmental issues, a very modern phenomenon.  However, since their entry into government it appears the Greens have abandoned many of their values, and it will be interesting to see whether they can survive as a viable political force.

In conclusion, then, the party system in Germany has been affected by many factors, including the role assigned to parties in the Basic Law, the role of the Federal Constitutional Court, sociology, and history, as well as the electoral system.  It is difficult to see how any of these factors could be said to be pre-eminent, since they are intertwined to such a great extent, and it is also difficult to predict how the system will change in the future.  The PDS, the remains of the old communist party in the GDR, is now in the Bundestag, and it is impossible to say how long they will stay there.  Likewise the Greens.  However, on the whole the history of the FRG is one of stable government, and this can be attributed to all of the factors noted above.