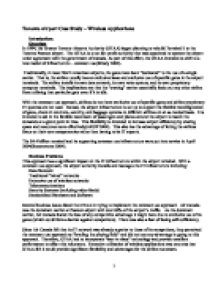 In 1994, the Greater Toronto Airports Authority (GTAA) began planning to rebuild Terminal 1 at the Toronto Pearson airport.  The GTAA is a not-for-profit authority that was appointed to operate the airport under agreement with the government of Canada. As part of this effort, the GTAA intended to shift to a new model of infrastructure – common use(Briody 2004).

Traditionally, in most North American airports, the gates have been “dedicated” to the use of a single carrier.  That is, the airline usually has an exclusive lease and exclusive use of specific gates in the airport terminals.  The airline installs its own data network, its own voice system, and its own proprietary computer terminals.  The implications are that the “owning” carrier essentially locks out any other airline from utilizing that particular gate even if it is idle.

With the common use approach, airlines do not have exclusive use of specific gates and airline proprietary IT systems are not used.  Instead, the airport infrastructure is set up to support the flexible reconfiguration of gates, check-in counters, security, and baggage systems to different airlines on an as-needed basis.  It is intended to aid in the flexible movement of passengers and planes around the airport to match the demands at a given point in time.  This flexibility is intended to increase airport efficiency by sharing space and resources more effectively(ARUP 2004).  This also has the advantage of letting the airlines focus on their core competencies rather than having to be IT experts.

The $4.4 billion terminal and its supporting common use infrastructure were put into service in April 2004(Rosencrance 2004).

Must be available at all times of airport operations

Voice over IP communications must be maintained under all network loads

Must be available at all times of airport operations.

Do not impact response time of other applications

Ranking of importance of Services/Applications

The following table summarizes the relative importance of each of the applications that was identified in the previous subsection.  These start with the most important.

Applications that utilize the wired network

Applications that utilize the wireless infrastructure and wired network

The scope of this business continuity plan covers the last two items associated with the wireless infrastructure.  Because of the reliance of the new airport terminal on this new technology, it is important that the continuity of this infrastructure be addressed to meet the needs of GTAA, the Canadian department of transportation, and the users of this airport.

Key Elements of the Plan

The plan identifies the services that are dependent on the wireless infrastructure and continuity objectives for each of the applications associated with those services.  Those services are:

The plan then describes and prioritizes the Single Points of Failure in the wireless infrastructure.  The relationship to those single points of failure and services and applications is also established.

Special attention should be paid to the recommendation on power facilities for the wireless infrastructure.  Given that security communications is reliant on the wireless infrastructure, an 8-hour battery backup is recommended to insure that security can be maintained even in the face of a catastrophic power failure such as the blackout that was seen recently in the northeast section of the United States and Canada.  Even though airport operations will be disrupted in such an event, it is important that security retains the ability to communicate during the event.

Note that the data backup and recovery procedures are not covered in this business continuity plan but are contained in the corresponding continuity plan that covers the non-wireless infrastructure.