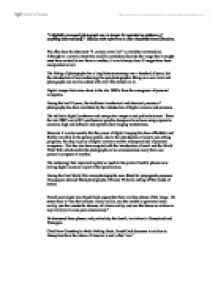 &quot;A digitally processed photograph can no longer be regarded as evidence of anything external itself.&quot; Discuss with reference to Jean Baudrillard and Simulcra.

"A digitally processed photograph can no longer be regarded as evidence of anything external itself." Discuss with reference to Jean Baudrillard and Simulcra. We often here the statement "A camera never lies" in everyday conversation. Although to a certain extent this could be considered because the image that is caught must have existed in one form or another, it is not always clear if images have been manipulated or not. The faking of photographs has a long history scanning over a hundred of years, but the introduction of new technology has put photographic faking on a new level and photographs can now be edited with very little trouble at all. Digital images first came about in the late 1980's from the emergence of personal computers. ...read more.

During the First World War many photographs were faked for propaganda purposes. Newspapers showed faked photographs of Kaiser Wilhelm cutting off the hands of babies. French sociologist Jean Baudrillard argues that there are four phases of the image. He states there is "one that reflects a basic reality, one that masks or perverts a basic reality, one that masks the absence of a basic reality, and one that bears no relation to any reality (is its own pure simulacrum)." He discussed these phases, and particularly the fourth, in relation to Disneyland and Watergate. Cited from Grossberg's Media Making Book, Baudrillard discusses in relation to Disneyland how the whole of America is not in fact 'real.' "Disneyland is there to conceal the fact it is the 'real' country, all of 'real' America, which is Disneyland (just as prisons are there to conceal the fact that it is the social in its entirety, in its banal omnipresence, which is carceral). ...read more.

Although digital imaging has been used in films for over 20 years it is still moving forwards and breaking new ground with the majority of films released. A major advantage digital imaging has is once the images are in the digitalised alterations can be made without damaging the original material. Digital imaging also can be replicated without the losing any of its quality. "The Lord of the Rings" movies are a great example of use of digital imaging to create, virtual characters and landscapes. These films contain a large amount of CGI effects that are done in such a way it makes you think the characters and landscapes created are in fact real, which just goes to show how that easy it is to fake photographs and images if you have the right technology. http://www.photo.net/history/timeline Grossberg, L et al (1998) Media Making: Sage Stevenson, N (1995) Understanding Media Cultures: Sage ...read more.