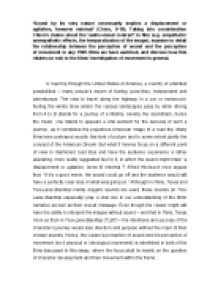 Although in Paris, Texas and Two-Lane Blacktop mainly diegetic sounds are used, these sounds (in Two- Lane Blacktop especially) play a vital role in our understanding of the films narrative as well as their overall message.

﻿?Sound by its very nature necessarily implies a displacement or agitation, however minimal? (Chion, 9-10). Taking into consideration Chion?s claims about the ?audio-visual contract? in film (e.g. empathetic/anempathetic effects, the temporalization of the image), examine in detail the relationship between the perception of sound and the perception of movement in any TWO films we have watched, and discuss how this relates (or not) to the films? investigation of movement in general. A road trip through the United States of America, a country of unlimited possibilities ? many people?s dream of feeling (care-)free, independent and adventurous. The idea to travel along the highway in a car or motorcycle, feeling the winds blow and/or the various landscapes pass by while driving from A to B stands for a journey of a lifetime. Hereby the soundtrack, hence the music, one listens to appears a vital element for the success of such a journey, as it completes the prejudiced American image of a road trip. Many films have portrayed exactly this kind of picture and to some extent glorify the concept of the American Dream. But what if movies focus on a different point of view in mentioned road trips and have the audience experience a rather alienating, more reality suggested feel to it, in which the sound might imply ?a displacement or agitation, (even if) minimal.?? Alfred Hitchcock once argued that, ?if it's a good movie, the sound could go off and the audience would still have a perfectly clear idea of what was going on.? Although in Paris, Texas and Two-Lane Blacktop mainly diegetic sounds are used, these sounds (in Two-Lane Blacktop especially) play a vital role in our understanding of the films? narrative as well as their overall message. Even though the viewer might still have the ability to interpret the images without sound ? and that in Paris, Texas more so than in Two-Lane Blacktop (TLBT) ...read more.

A vococentric use of sound is hereby more so present in Paris, Texas, as it underlines the relevance of it in relation to the journey Travis undertakes. ?It almost always privileges the voice, highlighting and setting the latter off from other sounds.? (Chion, p.5). A stronger attention indeed is paid to the dialogues in Paris, Texas, as the establishment and reconnection between characters within the story are vital to the development of Travis? character and therefore his movement forward. In TLBT, on the other hand, the audience is distracted from the speeches made in the film through the environmental sounds, as the motor sounds in a majority of scenes accompany the words spoken by the characters, undermining their importance to the overall journey. One has to bear in mind the realistic approach towards the moment of driving intended in TLBT where the viewer is meant to relate to the fact that often times one cannot hear what a person is saying while sitting in a car. The need to speak up in a car more so than in another enclosed room becomes both a cinematic and real experience for the audience. It stresses the different levels of communication in real life and suggests a loss of ?added value? of sound in relation to the seen image. Both movies furthermore question the individual?s fascination with movement and speed, yet they take slightly different approaches when doing so. TLBT contrasts extremes with another, for example the Driver and Mechanic demonstrates a great fascination for cars, and hence for movement and speed; whereas the girl not showing any knowledge or interest in cars and mechanics whatsoever: ?What kind of car is this anyway??. If the journey on the road i.e. the road trip symbolizes the individual?s road to the fulfillment of his personal dream, then this may be a comment on the notion that not everyone is interested in attaining this dream or the speed at which he attains it. ...read more.

Not only the image but its corresponding sound here causes some form of displacement, as the viewer now has to realize that what sound and image tried so hard to present as reality throughout the entire film is being reversed through the emphasis on the fact that it only in fact was a film. ?The real, for all practical purposes, is, at the level of surface, glossed; everyday experience its representation. A cinematic society, a society of the spectacle, a society which constantly views itself reflected back to itself on the glare of the TV screen is only what is seen. What is seen is a ?realistic? cinematic version of what the ?real-should-be?.? (Denzin, p.124) This precisely can be drawn from both films and their approach towards ?film? as a medium, which uses sound as its supporting device, and clearly comments on the question of reality in relation to the (moving) image. Concluding one can say that both movies rely strongly on their soundscape in order to reveal not only the intention but also development of the story within the film. If the soundscape weren?t as mechanic and continuous in TLBT the emphasis on the feel for driving would not be as present and coherent to the audience and the meaning of the movie would be a different one. If Paris, Texas hadn?t made use of the non-diegetic theme tune along side the realistic diegetic sound, the connection between Travis and the other characters as well as Travis and the spectator himself would be lost. Whether there is an actual plot within a film or not, sound plays a vital role in transporting the audience into a world which may not be their own but they can relate to, or significantly feel alienated by. ?These two perceptions mutually influence each other in the audiovisual contract, lending each other their respective properties by contamination and projection.? (Chion, p.9). The relationship between movement and sound is one that is apparent in reality ? where else would one take the idea of its representation in moving images from after all. ...read more.