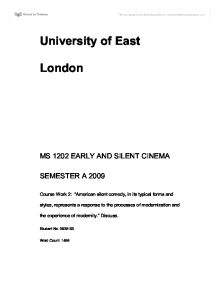 American silent comedy, in its typical forms and styles, represents a response to the processes of modernization and the experience of modernity. Discuss.

As most jokes in comedy plays with sexual, racial, social class or political differences and compare with other parts of the world, America is more open mind and more democracy, that contribute to the position of American comedy in the world. In addition, as Belton( 1994 p:135) argued comedy is never taken seriously, American film comedy can often deal with these sensitive issues more openly than other which made it has more "official" genres than other countries, like the historical film or the Western. Thus, the feature of the American comedy can be concluded as the gags used in those comedies are more openly in sensitive issues such as sex, race or even about politics than comedies from other countries and this is the factor of why the American comedy leads the world today as well. Secondly, this essay is going to explain what exactly modernization and modernity are, and discuss modernism and silent cinema. The meaning of modernization can be defined as the appearance of "modes of social life or organization which emerged in Europe from about the seventeenth century onwards and which subsequently became more or less worldwide in their influence." (Giddens, 1991) The modernization covered a wide range of issues, such as economic, cultural, social and so on. However, no matter what issue, it has connected to the changes of the way of communication and mass media. ...read more.

Both of the two current affairs can be regarded as the results of modernity. Hence, the American silent comedy represents the response to the processes of modernization and the experience of modernity in the specific period of time at the beginning of the 20th century. As the process of modernization continue, the new techniques of microphone and sound in films emerged, the silent comedy began to wane. However, the American silent comedy still attract audience today to see the past period of modernization at the beginning of 20th century. In conclusion, the silent comedy emerged almost at the same time when cinema of attractions emerged. Early silent comedies were short with few or even only one joke. After the film industry grow and become as a mass medium, it become one of the issues which connected to the modernization and modernity. Due to the distinctive culture of more open mind in America, American comedy leads the world from the beginning of the 20th century until today. In the early period of time when the microphone technique and sound effects haven't been introduced, Charlie Chaplin and some other silent comedy stars film made in Hollywood led the world silent comedy. And most of their films described the life in the modernization world and have relation to the current affairs of the time when those films were made. After the new techniques of microphone and sound effects been introduced to the film industry, the silent comedy started waning and this can be regarded as another phenomenon of the continuing of modernization. ...read more.