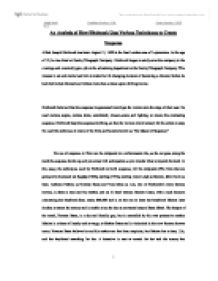 An Analysis of How Hitchcock Uses Various Techniques to Create Suspense.

An Analysis of How Hitchcock Uses Various Techniques to Create Suspense Alfred Joseph Hitchcock was born August 13, 1899 in the East London area of Leytonstone. At the age of 19, he was hired at Henley Telegraph Company. Hitchcock began to study art at the company in the evenings and eventually got a job at the advertising department at the Henley Telegraph Company. This interest in art and media lead him to make his life changing decision of becoming a director. Before he had died he had directed and written more than a dozen spine chilling movies Hitchcock believed that the suspense he generated would get the viewer onto the edge of their seat. He used camera angles, camera shots, soundtrack, mise-en-scene and lighting, to create this everlasting suspense. Hitchcock kept the suspense building, so that the viewers would scream for the action to stop. He used this technique in many of his films and became known as "the Master of Suspense." His use of suspense in films can be compared to a rollercoaster ride, as the car goes along the track the suspense builds up and you sweat with anticipation as you wonder what is beyond the bend. In this essay, the techniques used by Hitchcock to build suspense, will be compared. (The films that are going to be discussed are Psycho (1960), starring (1954), starring Janet Leigh as Marion, John Gavin as Sam, Anthony ...read more.

This creates suspense as we think that there is actually a mother as we are shown the skeleton of a dressed woman. This makes us think that Norman Bates' mother did actually kill Marion. Another good place where aerial shots have been used are when the detective is getting killed by the "mother" , Hitchcock decides to not show us the mother from the face as he wants to build up the suspense leading to the shock we experience later on in the film. Hitchcock is also known to be a cubist director, this is using the camera to stay in one position but rotating it to show that we are standing in the room where the camera is. Hitchcock makes use of this technique all the time in Rear Window, he does this to show us that we also cannot move because of Jeffery's broken leg, he is helpless and cannot get out of the room. This also adds to the suspense. This can be seen when we see Lisa going into the salesman apartment and he yells to her to get out. Cubism also builds up suspense and makes us question the characters' movements. When we see the salesman go through his wife's purse for the second time, we cannot see what happens behind the pillar, he may be throwing things away or may be getting something out of a cupboard, this is what makes us think "what was that all about?" ...read more.

I say this because Hitchcock has very good storylines for the films that have been analysed but does not have a very good climax. I think that today many people would lose interest in Rear Window as it also has a slow storyline and is very long, the one good thing about this film is that it is in colour. The storyline had too much talk but this is what built up the suspense, we gained knowledge about the characters. Another bad thing was that we never saw what happened with the salesman; all we knew was that he was arrested. I believe that Hitchcock uses a slow story line to make you listen and get a good grasp of the characters' personality. Many directors today borrow his techniques to make their films look better, a slow storyline was used in Titanic, which built up our understanding of the characters the soundtracks are jolly at fun times, whereas when the titanic sinks we hear mournful music. Had Hitchcock made his storylines a little faster people would love his films and they would all be famous. This proves that Hitchcock's techniques equals suspense, this is because they, the techniques, are used in very many horror films today. Hitchcock is to be placed near one of the top directors of the millennium. Abdul Mufti Candidate Number: 4138 Centre Number: 13329 10. F 1 ...read more.

This essay would benefit from a little research into the influence that Hitchcock has had upon film, and especially the techniques that he innovated which survive to this day. The author has done a fair job of trying to identify how Hitchcock uses various cinematic techniques and narrative devices to "create tension," and there is even some genuinely insightful observation along the way, but on the whole the argument could be improved by some research into what other people have already said about this subject.