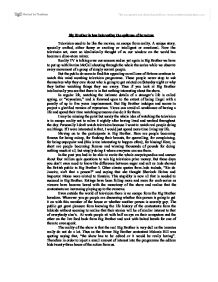 Big Brother is less interesting the epitome of boredom.

Big Brother is less interesting the epitome of boredom Television used to be like the movies, an escape from reality. A unique story, specially crafted, either funny or exciting or intelligent or emotional. Now the television set, once so idealistically thought of as our window on the world has become a dime-store mirror. Reality TV is talking over our screens and so yet again in Big Brother we have to put up with Davina McCall shouting through the whole the series while we observe every movement of a group of simply normal people. But the public do seem to find this appealing as millions of Britons continue to watch this mind numbing television programme. These people never stop to ask themselves why they care about who is going to get evicted on Saturday night or why they bother watching things they see every. Thus if you look at Big Brother intellectually you see that there is in fact nothing interesting about the show. In regular life, watching the intimate details of a stranger's life is called spying, or "voyeurism," and is frowned upon to the extent of being illegal with a penalty of up to five years imprisonment. ...read more.

In the past you had to be able to recite the whole encyclopaedias and answer about four million quiz questions to win big television prize money. But these days you don't even need to know the difference between sugar and salt as Jade showed the British public in Big Brother 3. Other classic quotes from Jade include, "Rio de Janeiro, ain't that a person?" and saying that she thought Sherlock Holms and Inspector Morse were related to Einstein. This stupidity is now all that is needed to succeed in Big Brother. Ratings have been falling more and more for each series as viewers have become bored with the monotony of the show and realise that the contestants are increasing playing up to the cameras. Even outside the world of television there is no escape from the Big Brother boredom. Wherever you go people are discussing whether this person is going to get it on with this member of the house or whether another person is secretly gay. ...read more.

First it had a personal element. They expressed themselves honestly as individuals, for themselves. Second it had a group element. They expressed themselves dishonestly in such a way that they would not encourage the others to vote them out. Third it had a viewer element. They expressed themselves dishonestly to curry favour with the viewers, who would decide the final winner of the competition. Add the contestants' exhibitionism to the viewers' voyeurism and you get a picture of a society sickly in thrall to the glamour of reality television. Such is the glamour of these dull but brilliantly spot lit events that anything resembling a real value - such as modesty, decency, intelligence, humour, and many others is rendered redundant. Why do people continue to sit at home and watch these half-attractive half-persons. Why do they watch the unashamed self-display of the talent less when there is so much real talent on offer if they were to change channel of pick up a book. Maybe they could read Orwell's Big Brother and see how one of the most relevant warning in literature has been packaged, marketed and fed to the hordes in perhaps the most vulgar and tedious way imaginable. ...read more.