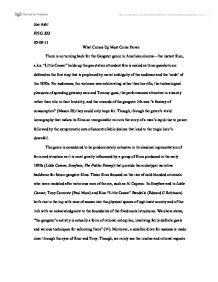 What Comes Up Must Come Down There is no turning back for the Gangster genre in American cinema-the instant Rico, a.k.a. "Little Caesar" holds up the gas station attendant fate is sealed as three gunshots are defined as the first step that is perplexed by moral ambiguity of the audience and the 'code' of the 1930s. For audiences, the violence was exhilarating rather than horrific, the technological pleasures of speeding getaway cars and Tommy-guns, the performances attractive in vivacity rather than vile in their brutality, and the rewards of the gangster life was "a fantasy of consumption" (Mason 29) they could only hope for. Though, through the genre's vivid iconography that makes its films so recognizable mirrors the story of a man's rapid rise to power followed by the symptomatic acts of uncontrollable desires that lead to the tragic hero's downfall. The genre is considered to be predominately cohesive in its classical representation of form and structure as it is most greatly influenced by a group of films produced in the early 1930s (Little Caesar, Scarface, The Public Enemy) that provide the archetypal narrative backbone for future gangster films. These films focused on the rise of cold-blooded criminals who were modeled after notorious men of the era, such as Al Capone. ...read more.

With a crazy grin on his face, Tony's eyes widen with delight and exhilaration at the sight of destruction. "The gangster life is immediately associated with an economy of excess, in this pleasure, which, however is replaced very soon after by an economy of violence" (Mason 25). Though, in Hawks' film the audience almost sees nothing of the machine-gunning, bomb explosions, and outrages in terms of human suffering. In Scarface, the violence is typically shown through montages. These sequences depict fast pace images-cars flying around the streets within the city and gang wars seem like children at play, only with real bullets. Wood exemplifies that, "the film communicates, strongly, a sense of exhilaration: Hawks actually encourages us to share the gangster's enjoyment of violence" (Wood 20). The gangster is always on the move, always in motion, propelled by his insane desire to get to the top. On screen, the constant craving for more: excess illustrated through forces of chaos and aggression becomes the gangster's domain. Employed within the unlimited possibilities of aggression, both Tony and Rico most viciously shoot their way to the top. Little Caesar and Scarface gave birth to the gangster whom not only makes violence a spectacle by turning it into performance but also showed off the wealth and status it provided. ...read more.

For Tony and Rico, their vulnerability becomes more and more apparent as the narrative progresses and they are considered outsiders rather than gangsters who abide by routine and rationalization within the criminal world. In Scarface, Tony looks to the neon sign outside his steel coated windows, "The World is Yours," for his existential motivation, and makes the mistake of literalizing its metaphorical content. What goes up must come down, even if it has to be shot down. The fall of the gangster comes rapidly after he has briefly reached the apex, or ironically, almost reaches it. "The downfall is often one of position and not just death," (59) says Kaminsky; Rico is reduced to poverty and Tony a state of innocence. The gangster manifests himself as an entity that challenges the status quo of modernity, without moral recognition, in a state of excessive destruction. It is difficult to rationalize the death of the gangster, but this uncertainty plays through his existence and demise. The gangsters whole life is an attempt to assert himself out of the crowd, and as Warshaw puts: "he always dies because he is an individual; the final bullet thrusts him back, makes him, after all, a failure" (15). Such is the allusion to the imagined narrative trajectory described in all understandings of this genre-the rise and fall of the gangster. ...read more.